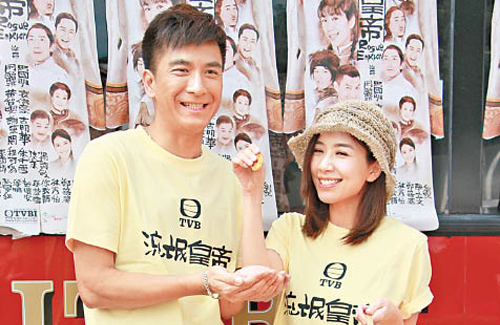 Kenneth Ma (馬國明) and Mandy Wong (黃智雯) attended an event to promote the currently-airing comedy series, Rogue Emperor (流氓皇帝). The drama, which also stars Niki Chow (周麗淇) as the leading actress, has aired to positive reception, which many netizens praising the comedy. Mandy shared that the first episode received approximately 23 or 24 points. “It will become even more comical later, so I am confident in the ratings!” Kenneth added, “[The ratings] are that high? That’s pretty good!”

Portraying a maid in the drama, Mandy shared that she her character will undergo a big change. “My character will experience a 180 degree change. I will perform a dance in a black silk outfit. There’s a black silk outfit and also a bathrobe! There’s a different look in each episode. I am also looking forward to seeing the episodes again.” Kenneth, who has always been known as a flirt, teased that he is also looking forward to watching the scenes. He lamented, “But all her kissing scenes were given to Hugo Wong (黃子恆)!”

When asked how they will repay viewers for good ratings, Mandy volunteered the male actors and said, “The four of them [Kenneth, Benjamin Yuen (袁偉豪), Brian Tse (謝東閔), and Jerry Ku (古明華)] will dance in black silk if it hits 25 points, so we can all see it sooner!” Kenneth retaliated, “Leave that to Brian! His legs are long! I have too much hair!”