Kenneth Ma, Mandy Wong to Have Relationship Breakthrough in “The Exorcist’s Meter 2” 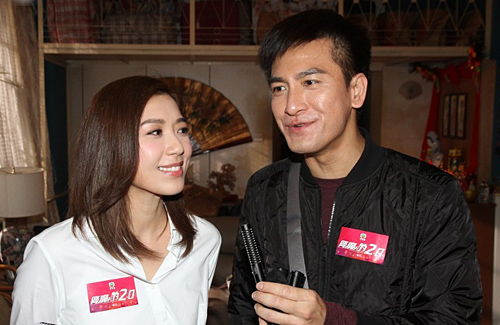 The cast of the anticipated sequel, The Exorcist’s Meter 2 <降魔的2.0> attended the blessing ceremony recently. Continuing from where the first drama ended, the sequel brings back many of the original stars, including Kenneth Ma (馬國明) Mandy Wong (黃智雯), Hubert Wu (胡鴻鈞), and Moon Lau (劉佩玥).

Praising the new script, Kenneth said that the sequel will have much more character development. “After reading the script, I think the sequel is consistent with the first drama. Even when a new actor such as C-Kwan (鄭詩君) joins the cast, the sequel still links to the previous drama. If the audience has a chance to watch the sequel, I think they may need to watch the first series again.”

In the sequel, Mandy and Kenneth are reunited and will be warming up to each other. Speaking of their romantic development, Kenneth shared, “In the first series, Mandy’s character lost her memory and forgot about the spiritual dimension. In this sequel, Mandy will get some memories of the experiences she had with my character and we will have a relationship breakthrough. Mandy will encounter new spiritual occurrences but this time, Mandy won’t be playing the demon anymore.”

When asked if there will be any intimate scenes, Kenneth replied, “I will add them in. It’s not like puppy love; the romance will be full of passion. We are mature and we aren’t 18 or 20 year-olds in love.”

As the original was highly popular, there were questions if the series will have more installments. Kenneth responded, “I asked the producer if there will be a third season, because the ending left room for development. The producer only smiled and didn’t answer. Honestly, any sequels will depend on the producer and reviews. If the story continues, I don’t mind. As an actor though, I don’t want to. It’s more fun to play new characters.”

7 comments to Kenneth Ma, Mandy Wong to Have Relationship Breakthrough in “The Exorcist’s Meter 2”