The 38-year-old performed some of his biggest hits, including “Red Eye Coliseum” <眼紅館>, “Loving for the First Time” <戀愛最初回>, and “Prophet” <先知>. Kenny thanked the audiences profusely at the end of every performance.

“I must thank everyone,” Kenny said after he finished his performance of “Loving for the First Time.” The audience responded by giving him even loud cheers. “Welcome all! Thank you all! I already want to cry. I originally had something planned to say, but now my mind is blank. You guys are giving me the biggest strength tonight. Please applaud! This is my first solo concert, witnessed by 8,000 of you.”

Though the concert is titled Kenny is Born, many netizens online had fun sharing creative Chinese names for the concert. Kenny has read them all. He joked, “Someone said I should call it ‘Bun Bun and EEG Stars Concert’ or ‘Big Kee Explose Bun Concert’. The name ‘Bun’ sounds like it can go with many names!” 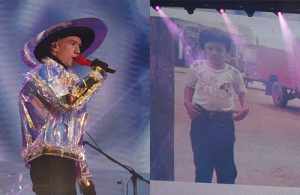 A fan in the audience yelled, “Mutual Respect Concert” <眼紅館>, a pun on Kenny’s Chinese name and Hins Cheung’s (張敬軒) Chinese name, to which Kenny said, “Alright! I know! I’ll mention this name! I thought you guys came here to listen to me sing?”

After singing “Goodbye Mei-wai” <再見美惠>, Kenny said, “I have to keep on thanking you all tonight, because every one of you had put me on this stage. The song that I just performed was requested by many fans. I did release four solo albums after all. I have enough songs!” When the audience didn’t react, he joked, “Just react to anything I say!”

Kenny will be playing for a second night, on September 14th. Guests will include Hins Cheung, Joey Yung (容祖兒), Leo Ku (古巨基), and Twins.

The September 14th  date was originally scheduled to be a concert date for Andy Hui (許志安), who had to cancel his tour after his cheating scandal with Jacqueline Wong (黃心穎) broke out. The date was then given to BOYZ, but member Steven Cheung (張致恆) had to step down from the concert after his own cheating scandal went public, leaving Kenny to carry the show on his own.