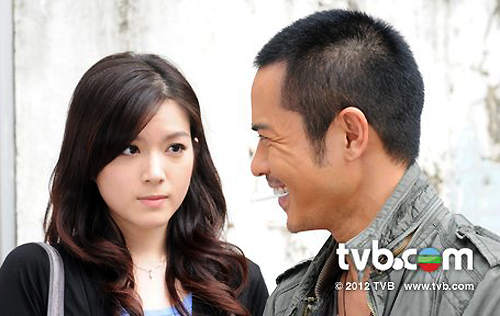 Currently in the peak of his acting career, Kevin Cheng’s (鄭嘉穎) love life has been more eventful than usual.  After being linked with mainland actresses, Jenny Xu (徐靖雯) and Ying Er (颖儿), Bu Bu Jing Xin <步步惊心> costar Annie Liu (劉心悠), and going through recycled rumors with former TVB actress Charmaine Sheh (佘詩曼), tabloids are now claiming that Kevin has been dating Christine Kuo (苟芸慧) since working together on the set of Ghetto Justice 2 <怒火街頭2 >!

According to 3 Weekly Magazine, 42-year-old Kevin Cheng has been pursuing 29-year-old Christine Kuo since working together on the set of Ghetto Justice 2 last year. Portraying Kevin’s ex-wife in the TVB drama, Christine had no qualms when she filmed intimate kissing scenes with him. Insiders revealed that Kevin took great care of Christine and often drove her home after work.

Unlike many of Kevin’s costars claiming that he is cold and quiet, Christine never had that complaint of him. She had once told the press that she found Kevin humorous and attentive. It appears that Kevin was very quick in warming up to Christine!

On July 30th, 2012, Myolie Wu (胡杏兒) treated the cast and crew of Ghetto Justice 2 to an abalone dinner in Tsim Sha Tsui. Throughout the dinner, Kevin was seen standing by Christine’s side like an attentive boyfriend. When their Ghetto Justice 2 costars tried to get Christine to drink, Kevin stepped in and helped her out.

After the dinner, Kevin allegedly wanted to take Christine home, but upon seeing the press standing by the exit, Kevin decided to leave by himself. Christine closely followed behind and left with a colleague, who dropped her off at a taxi stop in Kowloon Tong. Aware that she was being closely followed by the paparazzi, Christine did not return to her home in Tseung Kwan O, and spent the night in her female friend’s home in Sai Wan.