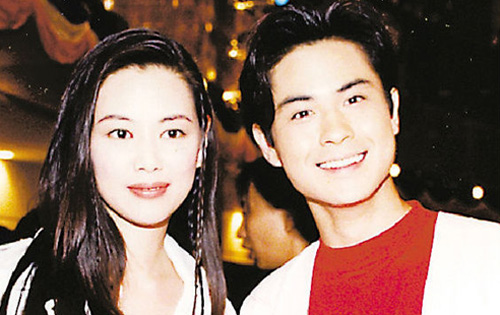 Kevin Cheng’s (郑嘉颖) ex-girlfriend, Linda Wong (王馨平), appeared in a cameo role in Hong Kong movie, Love in the Buff <春嬌與志明>. Since director Pang Ho Cheung (彭浩翔) was a Linda fan, one scene in the movie referenced her past romance with Kevin Cheng. Linda’s father, Wang Yu (王羽), did not approve of her former romance with Kevin, commenting, “When I first saw Kevin Cheng, I knew he had no future!” Mr. Wang’s comment infuriated Kevin’s fans for insulting their idol.

Kevin and Linda fell in love when they were both singers at Polygram in the mid 1990s. Linda was one of Polygram’s heavily promoted singers at the time, while Kevin’s career was not strongly established yet. As a result, Kevin’s music mentor, Dai Si Chung (戴思聪), and Linda’s father, Taiwanese director, Wang Yu, disapproved of their romance. After disputes with Dai Si Chung, Kevin was banished to Taiwan, where he struggled to make a living and endured one of the darkest periods of his career. After Kevin and Linda broke up, she married businessman, Stephen Lee.

After TVB management saw Kevin’s performance in 1999’s The Legendary Siblings <绝代双骄>, he was asked to join the company. He played supporting roles in Burning Flame 2 <烈火雄心 2> and Hard Fate <翡翠戀曲> before winning the TVB Best Actor Award for Under the Canopy of Love <天幕下的恋人> in 2006.  Kevin’s popularity increased dramatically last year, after the airing of Ghetto Justice <怒火街頭> and Bu Bu Jing Xin <步步惊心>, securing him multiple Best Actor Awards in the Asia-Pacific region.

Kevin’s turbulent career, coupled by his recent award-winning performances made many long-time fans proud of his accomplishments. When Linda’s father, Wang Yu, declared that he did not see a future in Kevin Cheng, his fans grew extremely angry. In defense of their idol, fans left angry messages on Linda’s Weibo account.

Linda apologized on behalf of her father for his insulting statement. Linda stated, “All along, I felt that Mr. Cheng is a successful and outstanding artist. Regarding my father’s comment, as his daughter, I can only issue my deepest apologies.”

Gracious despite Wang Yu’s criticism, Kevin replied that he understood that success was dependent upon one’s perspective. However, Kevin felt that in his mother’s eyes, he was a successful individual. He also understood that every father, including Mr. Wang, will want the best for his daughter. Furthermore, he joked that the stars of Love in the Buff, Miriam Yeung (楊千嬅) and Shawn Yue (余文樂) , should treat him for dinner, due to the additional publicity for the movie.