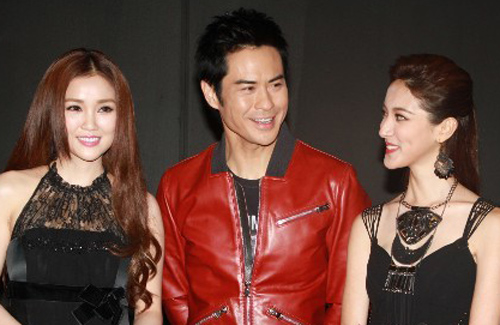 Wearing a low-cut dress, Grace said casually in response to reporters’ comments, “How is this sexy? I’ve already covered up most of it [with my necklace].” On the netizens’ habit of comparing Grace with Blue Veins co-star Kay Tse (謝安琪), Grace said, “They’re always comparing! But I try to avoid comparision.”

On whether she preferred Kevin to be clean-shaven or with a beard, Grace laughed and said, “Both looks are pretty good, they each have a different feel.” Grace then agreed that when a male co-star has beard, kissing scenes become more difficult.

Kevin was then asked whether he found Grace or Kay to be prettier. He responded diplomatically, “You’re asking the obvious. Everyone has different tastes and preferences…you shouldn’t care about what I think.”

On his absence at the wedding of fellow Bu Bu Jing Xin <步步驚心> co-stars Nicky Wu (吳奇隆) and Cecilia Liu‘s (劉詩詩) wedding, Kevin remarked, “It’s really far…perhaps he knows that I’m lazy and decided not to invite me for that reason. He did not want me to be stuck in a dilemma on whether to attend. If Myolie Wu (胡杏兒) had held her wedding in Bali, I may have had second thoughts too.” Was this an indication that Kevin did not get along with Nicky? Kevin immediately expressed, “No, we’re not so petty. To be honest, I have just not kept in touch with Nicky or Cecilia in the past few years. We’vel been busy with our respective engagements. Whatever it is, we’re fine.”