Last month, Kevin Cheng (鄭嘉穎) and Grace Chan (陳凱琳) welcomed their son, Rafael Cheng (鄭承悅). The first six weeks of a newborn is always hardest for the parents. The first month of birth is a vital period for the newborn to learn how to adjust to a new environment beyond the womb.

For Kevin, the first month of fatherhood felt like a battlefield to him, like he was a general working under the commands of an “emperor.” 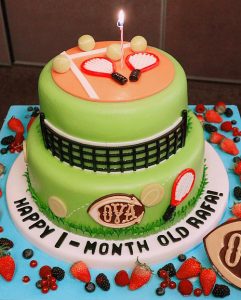 “There is no organized schedule,” said the actor. “I just know that I must focus my time on my family now. Without an extra pair of hands to help, it’s going to be impossible. We do have postpartum helpers, each with a morning and night shift, but that still isn’t enough. My emperor is really demanding. He cries a lot. You have to be fast. If you’re any slower he’s going to cry even more. And there’s no tears! Just his voice.”

Kevin added that his son is also very fussy and difficult to please. Sometimes he would get irritated when an adult is trying to burp him. Because he still doesn’t know how to express his discomfort, he would resort to kicking up a fuss and cry even more.

Asking Kevin if he plans on chasing for another child, he laughed and said, “Let me get through this one first! The first month is definitely the most difficult. I need to calm myself first. To be honest, he is always on my mind. My entire life, mindset, and line of thinking have changed. He takes the number one spot, while I am in last place.”

Fatherhood has also changed Kevin’s way of approaching his career. Whilst in the past he would take on whatever job that was offered to him, Kevin has now become more decisive in accepting jobs. 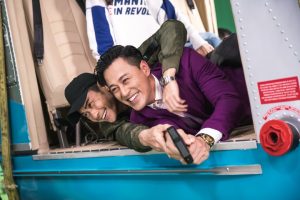 The TV-turned-film actor has recently been promoting his upcoming action film P Storm <P風暴>, which opens in Hong Kong on April 4. In the film, Kevin plays an ICAC officer investigating Raymond Lam’s (林峯) character. Recalling the many action scenes in the film, Kevin said the most unforgettable one was a chase scene which he called “the marathon.”

“I ran from a sports ground, to an office, to the street. I’ve never had to run for that long before. It really felt like I was doing a marathon.”

P Storm is Kevin’s first collaboration with Raymond in 15 years. Their last work together was the TVB drama, Yummy Yummy. “It’s my first time doing an action scene with him. We all still go it in us!”

Kevin didn’t want to critique his own performance in the film, but did say that he shot every scene with his best effort. “Every skill requires build up. If you’re telling me to carry this entire film on my own, of course I’d be worried. A movie is different from a TV drama. Coming across new movies to do are hard, while you get more opportunities in TV, as long as you’re willing to sign a long contract.”

Raymond Lam reveals how he proposed to his wife, Carina Zhang.

When netizens dug up Carina’s lingerie photos and criticized her, Raymond retaliated by fighting back.