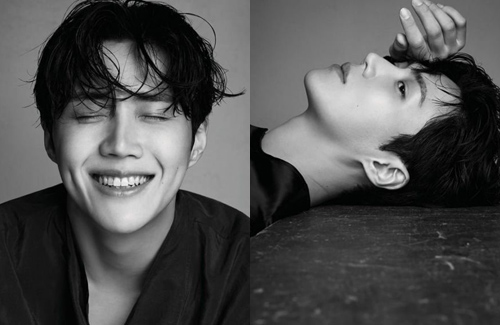 Korean actor Kim Seon Ho’s (金宣虎 ) company shared new images with his fans, stating that they are very meaningful as they are from his first magazine cover. Even though the photos are black and white and he has his eyes closed, the Start-Up actor’s charisma is evident with his bright smile. The 34-year-old had a breakout year in 2020, and shares what he looks forward to next.

Reflecting back on his first cover, Kim Seon Ho was filled with insecurity. “I was so happy when I was invited to be on the cover, but on the other hand I was a little worried. What if my poses are no good? What if I come off as awkward or dislikable during the photoshoot? I felt so nervous!”

Thrust into the limelight this year with his attention-stealing performance in Start-Up, Kim Seon Ho is not satisfied with his current fame and believes in continuous learning. “When talking with my seniors, I had previously heard that as we get older, we become more stubborn and set in our ways. This limits our potential. After hearing this, I thought to myself that I should always be open to improving and learning. This way, I can turn what I’ve learned into a habit. I also learned to pay attention to other’s strengths.”

When asked if he is in a state of constant change, he replied, “That’s right. Even though the change is not as apparent as before, I still hold the same attitude towards acting. It seems that there has been a change towards my confidence in my acting skills. Recently I felt that I had plateaued, luckily I encountered my character Han Ji Pyeong in the drama Start-Up. It brought on a lot of change, and I hope to be able to expand on this new, unknown side of myself.”

“Start-Up” Cast Reflect on Working Together