Since Kim Seon Ho‘s abortion controversy broke, his career has seen more twists and turns in one week than the past decade. Although he initially seemed to face the danger of cancel culture, South Korea’s Dispatch revealed that his ex-girlfriend Choi Young Ah may have lied and cheated in the relationship. As public opinion towards Seon Ho warms up again, advertisers are activating the ads they initially pulled in the immediate aftermath of the scandal.

After his breakout performances in Netflix’s Start-Up and Hometown Cha-Cha-Cha,  Seon Ho’s fame rose quickly. Acting in various television series and hosting a few variety shows, Seon Ho was cast in three films, of which he has been dropped from two projects because of the abortion controversy.

Seon Ho was originally scheduled to appear in 2 O’Clock Date with YoonA, a romantic comedy about the unlikely encounters between a woman with a secret and her neighbor, as well as pet-themed film Dog Days with Yoon Yeo Jung. However, the actor was dropped from both films due to his scandal.

Only director Park Hoon Jung’s Sad Tropical, which is scheduled to film in November, did not state whether Seon Ho is still involved in the project. The story is about a man with a Korean father and a Filipino mother, who has dreams of becoming a boxer. He then returns to South Korea in hopes of finding his long-lost father. 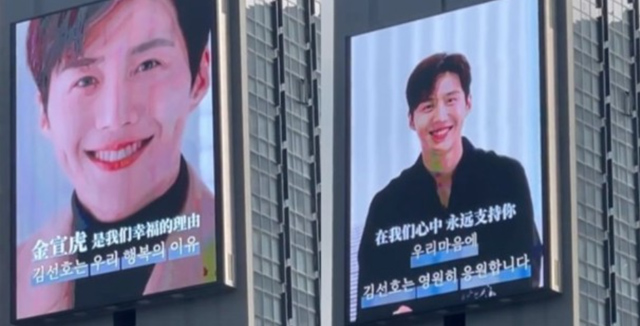 After Seon Ho started losing film projects and his advertisements were pulled, Dispatch‘s report, in which three mutual friends of the actor and his ex-girlfriend spoke up for Seon Ho, helped turn around public sentiment.

Fans hope Seon Ho would not be punished for what had happened in his relationship, and some Mainland Chinese fans showed their support by putting up LED ads outside a large shopping mall in Samseong-Dong, Seoul. The advertisements read, “Kim Seon Ho is the reason for our happiness” and “I will always support you in our hearts.”

His Hometown Cha-Cha-Cha cast also showed support for Seon Ho by putting up group photos of them together on social media.

Since S.A.L.T. Entertainment clarified earlier that the actor still has a one-year outstanding contract, the agency is expected to orchestrate a comeback for Seon Ho.

Today, the camera and face masks ads that feature Seon Ho are reactivated. It is speculated that more brands will follow as fan support remains for the actor.