Former EXO member Huang Zitao (黄子韬) celebrated his 26th birthday on May 2nd and wrote a sentimental post on Weibo. He wrote, “It’s not that I have nothing to say, I want to say a lot, but I don’t want to be emotional. Thank you to those who have accompanied me and to everyone who has supported me. Finally, I wish myself a happy birthday!”

Having formed a good relationship with many in the entertainment industry, Tao received a lot of blessings from fellow artists and fans when the clock struck 12. Among a large number of blessings, the most eye-catching was Kris Wu‘s (吳亦凡). 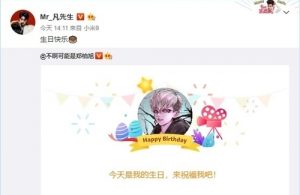 only wrote a simple “happy birthday” followed by a cake emoji on his own page, netizens saw that Kris was only on Weibo for one minute all day. They believe he saw the importance in his friend’s birthday and took the time out of his busy schedule to log onto Weibo to send Tao birthday wishes. Fans were thrilled about it and wrote positive responses such as, “Good brothers for a lifetime” and “I am really happy to see two people so good, I hope it will continue this way.”

It’s no wonder fans are so excited about the interaction, as it’s Kris’ first time taking the initiative to dedicate a Weibo post to Tao since leaving EXO. When Kris suddenly withdrew from EXO in 2014 without informing his teammates beforehand, the news hit Tao hard. The latter made a big fuss about it and even wrote a post about betrayal.

However, Tao expressed regret later on when he also left EXO to develop his career in China. In an interview, he burst into tears on the spot when mentioning Kris. “If I get the chance, I will tell him that I was impulsive,” Tao said, unsure if Kris would forgive him and describing the betrayal post as the most regretful thing he’s done.

The two’s relationship gradually improved other the years, and the turning point came at the end of last year when both of them were invited to participate in a New Year’s concert. During the countdown, they stood next to each other on stage shoulder-to-shoulder. At the end of it, the pair laughed and gave each other a big hug, as if to solve all the misunderstandings from the past. The hug was regarded as the “ice break of the century.” Afterward, Tao began promoting Kris’ new songs on Weibo, signaling the return of their brotherhood.