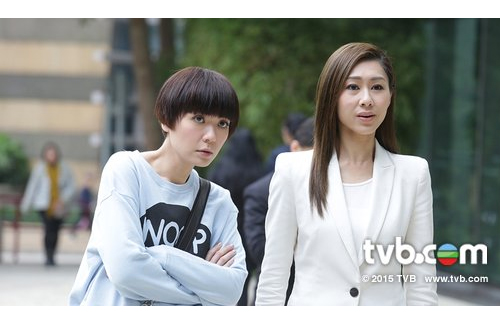 To promote the series, the cast of TVB’s current drama Ghost of Relativity <鬼同你OT> went to Lan Kwai Fong to pass out free coffee to civilians. The interactive promotional event eventually turned into a mini impromptu fanmeeting for Moses Chan (陳豪), who was swarmed by fangirls asking for his picture and autograph. The crowd around Moses thickened with time, attracting other citizens to line up around Moses, waiting to get a picture taken.

Ghost of Relativity has been receiving good viewership ratings since its premiere on July 13. Moses said he is satisfied with the drama’s results. Kristal Tin (田蕊妮), however, said she would go out in a bikini if the drama reaches 35 rating points.

She said, “I’ll wear a bikini. And not the one-piece kind either. I’ve been waiting for this opportunity for a long time, but I’m afraid that the audience would turn off the TV when they see me! I don’t want that to happen.”

Asking if her husband, Chapman To (杜汶澤), have any photos of Kristal wearing a bikini, she humorously said, “He doesn’t know how to swim, so he doesn’t really get the chance to see me in a swimming suit. He has taken pictures of me before though, some with clothes, and some… haha!”

Ghost of Relativity, a supernatural romantic comedy which also stars Nancy Wu (胡定欣), will air its final episode on August 7.