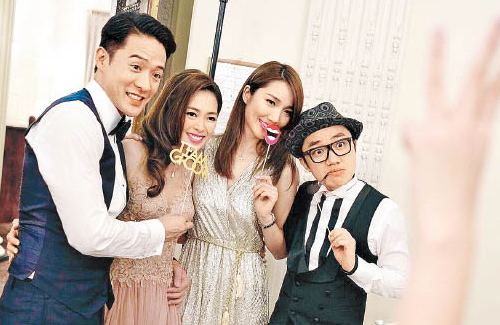 Leanne smiled, “Sarah and I lived with each other after she participated in the Miss Chinese International pageant. I knew when she had first started dating Jason, when they still kept the romance a secret from the public. I’ve witnessed this relationship come to fruition.”

Keeping the wedding ceremony fairly small, Sarah planned all of the wedding details by herself. Leanne’s husband, Wong Cho Lam (王祖藍), praised Sarah for keeping the wedding simple. Cho Lam revealed that he was actually acting as a messenger for Jason’s father who wanted to thank TVB for creating this couple. The comedian said, “He said there was no way these two people could’ve ever met if it weren’t for TVB. One was from Australia, and one was from England. There was no way they would meet.”

Aside from Leanne, Sarah’s other bridesmaids were Samantha Ko (高海寧), Sherry Chen (陳爽), and Katy Kung (龔嘉欣). Honored to be one of Sarah’s bridesmaids, Samantha laughed and revealed, “Jason was very sincere. He gave us a pretty big red pocket already but afterwards when we upped the price, he immediately agreed to it. We could tell he really wanted to marry Sarah. I wish them happiness – they’re very lucky that they’re able to find each other.”