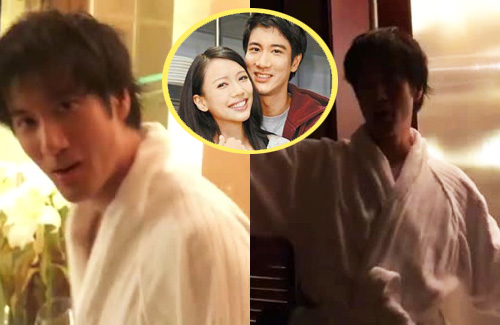 In a social media post this week, Leehom Wang (王力宏) complained that his wife Lee Jinglei (李靚蕾) only has eyes for her cell phone and would rather ignore him. Even when he takes off his shirt, Jinglei does not even notice. Although Leehom’s comment was made in jest, Jinglei decided to take sweet revenge by filming Leehom secretly in the bathroom.

The video starts with Jinglei saying, “It’s showtime.” It turns out that Leehom has a habit of singing every night in the bathroom. As the door slowly opens, Leehom is seen talking on the cell phone while looking at a laptop. Pulling out a scale to weigh himself, the 5-feet-11-inch star’s weight is revealed to be 159 pounds.

Eventually, Leehom realized that Jinglei was filming him. He laughed and said, “Why are you filming me? Is this your revenge?” As Jinglei giggled in response, Leehom spread his arms and said, “I’m going to have a concert in my bathrobe,” and continued to sing. The video ends with Jinglei laughing.

Fans were delighted by what they saw in the video, praising Leehom’s sense of humor. It was also evident that Leehom and Jinglei have a fun and easy-going marriage; fans complained that they were going to be blinded by the couple’s love.