The day before Valentine’s Day, actress Linda Chung (鍾嘉欣) and her chiropractor husband Jeremy Leung attended an ice hockey game in Vancouver. It is known that she refrains from sharing pictures of Jeremey on social media since he is not part of the entertainment circle. Instead, the 34-year-old mother of two generally sticks to uploading photos of her children, but she couldn’t hold back this time around and posted two photos of her and Jeremy at the game on Instagram.

Currently living in Vancouver, the Canucks invited her and her husband 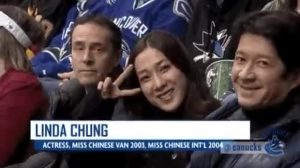 to their match yesterday. The couple accepted the invitation and took the chance to ditch their kids for date night. Their attendance was acknowledged when they showed up on the Jumbotron with the venue introducing Linda as “Actress, Miss Chinese Vancouver 2003, and Miss Chinese International 2004.” As Jeremy sat next to her, Linda kept waving happily to the camera.

She posted two photos of their Jumbotron moment on Instagram but used a heart to cover her husband’s face. In one of the pictures, she circled themselves in the audience to show everyone where they were sitting. Just when we thought we won’t get a good glimpse of Jeremy, Linda posted an uncensored video on her Instagram story. She was making the peace sign at the camera, and her husband was grinning from ear to ear as he looked at her. Netizens thought the clip was very sweet.

Also invited to the game was 39-year-old actress Bernice Liu, who entered the stadium with friends. 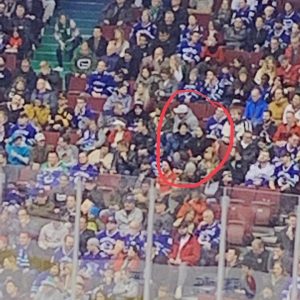 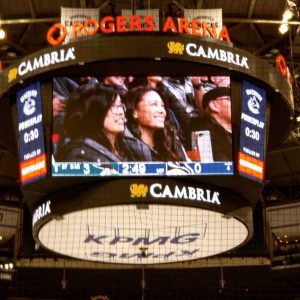 Returning back to Vancouver, Linda said chances are unlikely she will film for TVB in the near future.