Linda Chung is the Big Boss in Hong Kong 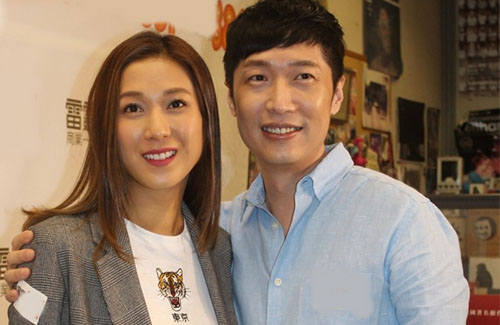 Earlier this month, Linda Chung (鍾嘉欣) returned to Hong Kong to do an interview with her close friend Steven Ma (馬浚偉). The Heart of Greed <溏心風暴> star said she would be staying in Hong Kong for approximately two weeks, with the intention of celebrating Mid-Autumn Festival with her family. Her husband Jeremy and her daughter Kelly also came to Hong Kong with her.

“They’re probably walking around right now,” said Linda. “Don’t take pictures!” Asking Linda if she’s worried that her husband would get lost in the big city, Linda said, “I do. His Cantonese isn’t very good after all. I’m usually the weaker one in Canada. I had to rely on him all the time, but now that we’re back in Hong Kong, I definitely feel like the big boss. I’ll take care of him!”

During the interview, the close friends caught up with each other and shared some of their past filming experiences with the press. Steven said Linda was one of his hardest candidates to interview—because they were so close, there were many things that Steven wanted to talk about with Linda, but couldn’t.

Steven then recalled his experience working with Linda for TVB’s Ghost Writer <蒲松齡> in 2009. That year was one of Linda’s roughest since her debut. “She’d come to work looking like a zombie every day,” said Steven. “One day, she told me, in a serious tone, that she’s seen a ghost at home.”

“That was what I thought,” said Linda. “I was so tired I started seeing things.”

“She would come to work in tears,” Steven added. “We were so worried about her.” Linda explained, “I was homesick. I had three ongoing projects on top of Ghost Writer.” Steven said, “She really didn’t have time to sleep, because of that, her immune system was affected. She started growing hives all over her body, and her skin was peeling off to.”

Linda then shared, “Ah Gor stopped the camera halfway because he had to peel off the skin on my left ear before we could continue filming.”

Steven once suggested Linda to “collapse the studio” (halt filming) and take a break, but Linda said she didn’t dare to. “I was scared. I never asked to collapse because I was still a rookie.”

Upset and irritated by Linda’s response, Steven decided to take the matter to his own hands. “I wouldn’t collapse, so Steven did instead. He halted filming so I could rest.”

“I didn’t fake it,” said Steven. “I literally told the director that I couldn’t film anymore. There’s no way I could get in character when I see my partner looking this miserable.”

With her home in Canada, Linda has to fly back and forth for work. Linda said she enjoys this lifestyle. “Someone once told me that it’ll be hard to balance the two, and that I could only choose one. But I want to do the exception. I control my own life.”