Miss Hong Kong 2020 winner Lisa Tse (謝嘉怡) has been well-liked by audiences since the beginning of the competition, given her beautiful looks and enthusiastic personality. Shortly after winning the crown, the 25-year-old already landed her first job filming a promotional video for Henderson Land Development’s Two Artlane project. With plans to further her career in Hong Kong, she disclosed her hopes and dreams of one day buying a home in the city.

Despite this being Lisa’s first job after the pageant, she was very natural on camera even though she claimed to be nerv 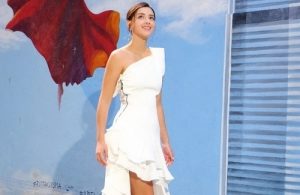 ous. The filming took over 10 hours to complete, but Lisa conquered the challenge very professionally. She said, “Usually, the other pageant girls are here with me, but I am a little nervous this time since they aren’t. However, this whole day has been really fun.”

Since Lisa was an overseas candidate from Scotland, speaking Chinese has been a struggle for her. To prepare for this promotional video, she spent a lot of time beforehand practicing the long script. She said, “Since the script is in Chinese, I had to write the pinyin to know what to say.” Though her lines gave her difficulties, everyone on set could see her hard work and potential in this industry.

Her Dream of Buying a Home 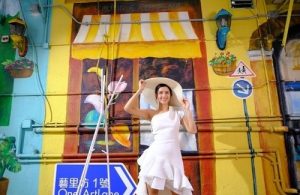 As such, she already has big dreams of buying a home in Hong Kong at such a young age. She said, “I want to buy property in Hong Kong, so I have to save up money. If the timing is right, I will buy it.”

With such grand plans, Lisa understands that she needs to learn how to be independent if she hopes to develop her career in Hong Kong. Her father, Peter, had accompanied her to Hong Kong for the pageant, but he still has business in England, so he can’t stay for long. Meanwhile, her mother couldn’t make it to the competition due to the strict flying limitations on foreign travelers given the COVID-19 pandemic. However, Lisa did reveal that her mother would be flying in soon.

Spending Time With Her Father 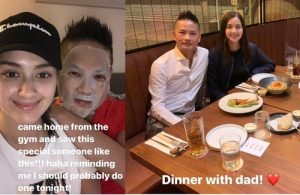 In the meantime, Lisa is busy spending time with her father when she’s not performing her duties as the crowned Miss Hong Kong, as seen on social media. Her newest Instagram story revealed a picture of her doing a face mask with her dad. She shared that she had just returned home from the gym when she saw her dad with a face mask on, and it reminded her to also do the same for good skincare practice. Afterward, the father-daughter duo went out for dinner, and Lisa was seen with a bare face again.