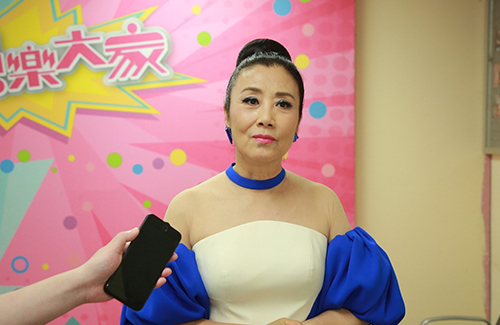 On August 12, demonstrations against police brutality were held at the Hong Kong International Airport, prompting the airport to cancel all scheduled flights that afternoon in attempts to control congestion and traffic. Though the airport was reopened the following day, protests continued. Check-ins that afternoon were canceled as a result.

As for Hong Kong’s entertainment industry, reactions toward the protest were mixed. While some celebrities have already picked their sides, others have chosen to stay on the side of peace. The Hong Kong “Cultural Harmony” group released a statement to urge all Hong Kong citizens to stop the violence, to protect the heart of Hong Kong’s value, and to respect the law. Celebrities such as actress Liza Wang (汪明荃), director Clifton Ko (高志深) and former singer Cally Kwong (鄺美雲) have signed the statement.

On August 15th, on the set of Liza’s TVB variety program Liza’s Online <娛樂大家>, the veteran artist expressed her thoughts about the protest to reporters. She urged protestors to stop their besiegement of the airport, saying, “The protests have been going on for two months now. I don’t know why suddenly some of it got violent. It’s been a long time now, and many industries are affected by it, especially with what happened at the airport a few days ago. It has become very serious. About 200,000 people are in that airport every single day—some traveling, some seeing family, and even some going to see the doctor. A lot of people are being impacted. Some of [the protests] turned violent in the end, and some other things are added to that. I think it’s about time to stop.”

Liza, however, wasn’t trying to say that the protesters should give up. She clarified, “I think not only Hong Kong, but the world are hearing the voices by the youths. However, we have to slow down and think about this. Should we really continue on like this? Will this lead to a good outcome for everyone? When you’re trying to fight for something, think about how you should approach it first. Find a way where we can all discuss it and solve the problem together.”

She continued, “[Protestors] can travel to every district, every street, and every alley. They can go wherever the government allows. Hong Kong is built by people of all ages, myself included. Everyone has the freedom to express their thoughts. However, they also must keep into consideration the freedoms of other people, too. I do believe that the youth will understand. The educated mind has the knowledge and the understanding. You guys should know what to do.”