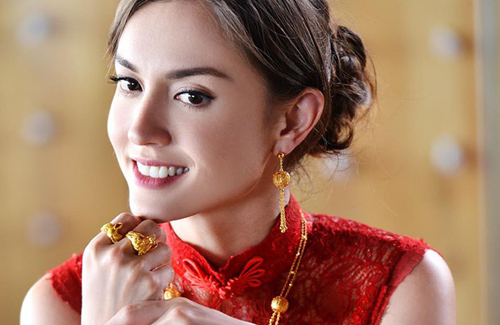 Model Mandy Lieu (劉碧麗) gave birth to a baby girl in London. The baby’s father, casino tycoon Alvin Chau (周焯華), accompanied Mandy to London although his wife, Heidi Chan (陳慧玲), is in her last trimester of pregnancy and also about to give birth.

Although Alvin claims to love his wife the most, Mandy became involved with him last year. After becoming pregnant, Mandy decreased her work projects in Hong Kong and rested in Singapore. Mandy often accompanied Alvin on his business trips together.

On May 20, 2015, Alvin flew to London to accompany Mandy during the last days of her pregnancy. After being admitted into a hospital, Mandy’s daughter was reported born via water birth. The couple was spotted leaving the hospital with a baby swaddled in Alvin’s arms.

After spending many days together, Alvin returned to Hong Kong due to work obligations. Mandy, however, remained in London to nurse her post-pregnancy health.

With Heidi’s Caesarean appointment to give birth approaching, her displeasure was evident through her Facebook post. With the post apparently targeted towards Mandy, Heidi wrote, “I never liked fighting with others over things. If you like it and can take it, then take it.”