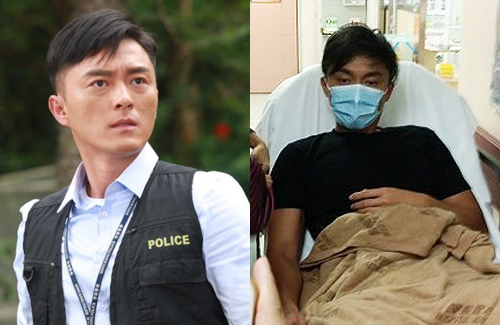 TVB actor Mat Yeung (楊明), who stars in the currently-airing crime drama On-Lie Game <迷網>, was involved in a serious traffic accident in the wee hours on Saturday, August 8, 2020. Police arrived at the scene and identified the driver as Mat. Claiming that he was unwell, Mat reportedly reeked of alcohol, and walked with unsteady steps. Refusing to take the breathalyzer test, he was arrested and sent to the hospital.

The 39-year-old actor allegedly lost control of his Mercedes Benz on a winding road at the affluent Mid-Levels area during a left turn, later transgressing into the opposite lane and hitting two crash barriers before mounting a curb and finally coming to a halt. Due to the impact, the car’s right bumper suffered extensive damage.

Driving Under the Influence?

His long-time girlfriend, actress Lisa Chong (莊思明) and her sister Jacqueline Chong (莊思敏) were later spotted at the accident site presumably to learn more about the situation, with the police commencing formal investigations into the case.

Calls from the media, who rang up Lisa, were answered by her elder sister Jacqueline, who acknowledged that she had visited the accident site. Adding that police investigations were ongoing, she said she was unaware of the details and unable to gain contact with Mat, therefore returning home to wait for further news.

Previous Brushes With the Law

In 2005, Matt was found to have illegally parked his car in the middle of Jordan Road, taking a nap within. He was fined $7000 Hong Kong dollars back then and had his license revoked for a year. In 2006, he was handed a bind-over order for attacking a security guard at a nightclub. During the bind-over period, he damaged items at a convenience store in an alcoholic state when he twice failed to make payment with his home return card, and was ordered to pay HK$3,880 worth of damages to the store in addition to serving 150 hours of community service.

Appearing on TVB entertainment news program Scoop <東張西望>, Mat recalled the scary auto accident which injured his head and spine. After completing x-rays and preliminary tests at the hospital, the actor assured he is doing fine. Though he apologized for driving while he was tired, Mat did not address whether he was driving under the influence of alcohol.

“Around 1:30 a.m., I drove my car to my work studio to study a drama script. At the bend of Peak Road, my car slammed into the rail and it was overturned. I passed out and don’t remember what happened afterward…. Watching the news, I realized the police helped me out and said I was drunk and needed support to walk. My head was dizzy after the accident and I wasn’t very clear-headed to do a breathalyzer test.”

Though he regretted wrecking public property and damaging rails on the road, Mat was glad he did not injure any people in the accident. “I’ve been very busy and sleeping late recently. While driving, I momentarily lost focus and had an accident. I’m sorry–this incident made many people worry and led to many speculations.” He will leave the followup details to his lawyer to handle.

Remaining in the entertainment industry for 22 years, Mat finally saw his star rising in recent years such as in Airport Strikers  <機場特警>. His latest involvement with the law will likely put a regrettable brake on his career.