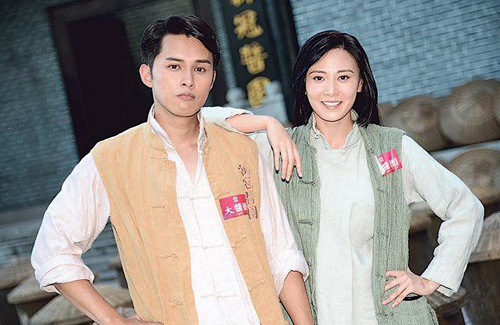 Currently in the middle of filming TVB drama The Great Soy Factory <大醬園>, rumored couple Matthew Ho (何廣沛) and Rebecca Zhu (朱晨麗) will have an upcoming bath scene together.

Matthew revealed that he has many scenes where he has to show his arms. There is also a scene in the drama where he and Rebecca will be seeing each other “naked”. The 30-year-old actor said it will be his first time filming such a revealing scene and smiled, “Our characters will coincidentally meet, as one is swimming in the water while the other is taking a shower. The director doesn’t even know how to film it yet, but if it’s fully naked, then it means I might be showing my bottom. I’m going to have to train my glutes when I have the time.”

When asked if he trains together with James Ng (吳業坤), Matthew said that they’ve turned the storage room into a gym area and will take turns training. They often have scenes where they have to be shirtless, so they would help each other out in reducing their body fat. Questioned if Rebecca has any opinions on their body shapes, Matthew responded that she has more opinions on James. Matthew hasn’t trained for a while, and doesn’t have time to do so either.

Katy Kung (龔嘉欣) visited the set yesterday to support the cast members. She joked that male cast members such as James Ng and Stephen Wong (黃嘉樂) are usually shirtless, but are now wearing clothes all of a sudden during her visit.

Katy expressed the hardest struggle in filming The Great Soy Factory is the heat. As she has three looks in the drama, she had to change her makeup three times a day. She also suffers Meniere’s disease, and would often feel dizzy on car rides, sweat easily, and vomit. With such symptoms, Katy was often teased by James to be pregnant.