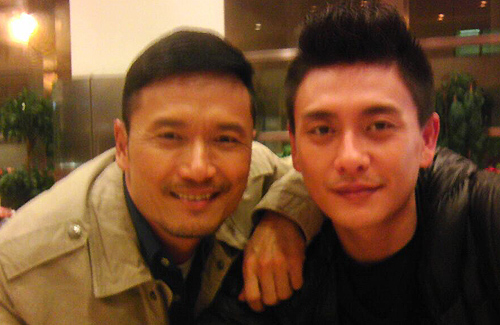 Michael Miu (苗僑偉) originally had plans to reunite with good friend Bosco Wong (黃宗澤) in TVB director Chong Wai Kin (莊偉健)’s upcoming series Midas <點金勝手>. Due to an unexpected schedule conflict, Michael is forced to withdraw from production. Bosco expressed disappointment about the news, and joked that he will require Michael to spend a seven-digit sum at his new oyster bar as punishment.

Michael and Bosco became fast friends while filming 2006’s Dicey Business <賭場風雲> and appeared in recently broadcast A Change Of Heart <好心作怪>. The two displayed their strong friendship at recent promotional events and often spoke highly of each other. Earlier, Michael revealed that he was set to star in an upcoming modern drama depicting the lives of today’s working class in a volatile financial market. Additional reports unveiled Bosco’s participation, and many fans are looking forward to the pair’s next collaboration.

Unfortunately, Michael confirmed on August 5 that he will be turning down the opportunity due to a sudden conflict. Michael said, “I have something I must do. I feel really terrible about this.” Asked if his health was a factor in his decision, Michael quickly replied, “No. Everything is fine. I only have to take care of some matters.”

Since TVB had custom-tailored the role for Michael, the company has decided not to look for a replacement and will instead remove his character completely from the script. Set to begin filming at the end of August, Midas will now stars Bosco as a wealthy and successful player in the finance world. Nancy Wu (胡定欣) will play his wife, and Kate Tsui (徐子珊) will play the third party who disrupts Bosco and Nancy’s marriage. The series will also star Ben Wong (黃智賢), Sharon Chan (陳敏之), and Elena Kong (江美儀).

Reporters contacted Bosco for his reaction. Bosco lamented at Michael’s withdrawal, but quickly came up with ideas of punishment. “I definitely feel disappointed! I miss him so much. I will make him treat me to 30 meals. Also, he will have to spend at least a seven-digit sum at my restaurant when it opens!”