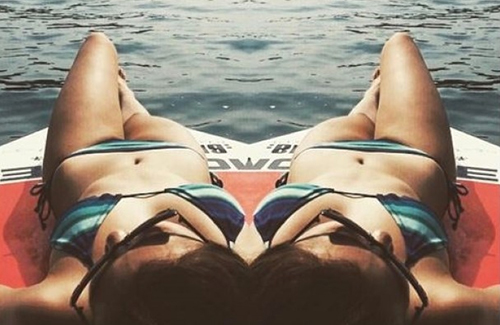 Although she has super famous parents, Michael Miu (苗僑偉) and Jaime Chik’s (戚美珍) 24-year-old daughter, Phoebe Miu (苗彤), is not bothered by the public’s curiosity of her private life. The University of British Columbia graduate recently shared that she has been enjoying her vacation by the sea and uploaded photos of her yacht trip, showing off her bikini body. Phoebe briefly collided with the Hong Kong media last year when the paparazzi published many of her personal photos with friends from Instagram and Facebook. As many of these photos consisted of Phoebe at the beach or at a nightclub with friends, the paparazzi claimed that she had a wild personality.

Her father, Michael, was upset with these exaggerated reports and apologized to his daughter for inadvertently exposing her private life due to his stardom. “Because I am an artiste, I have dragged her into this media mess,” he said.

But Phoebe, who is living in Canada, does not seem to mind too much. Her Instagram photos are still public, and she has also opened up a new website for her photography and artwork.