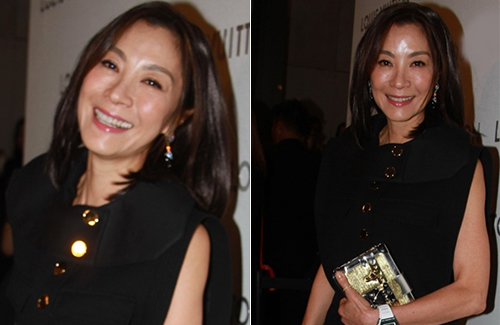 Michelle Yeoh (楊紫瓊) has been in a relationship with motor sport executive Jean Todt since 2008, and while the couple has expressed an interest in marriage, Michelle’s commitment to her films is preventing that plan from coming into fruition.

The Malaysian actress attended an evening event in Hong Kong last night, sharing with the press her career plans for the year. The Crouching Tiger, Hidden Dragon star said she’s been busy with the filming commitments for Star Trek: Discovery, an upcoming American TV series set before the events of the original 1966 series. Michelle stars as Georgiou, a ship captain.

“I’m leaving again tonight,” said Michelle “I’ll be spending a week in Jordan, and then fly back to Toronto.” (Worried about your safety in Jordan?) “The Jordan government will be sending an army to protect us. They will be following our filming schedule.”

Fiancé Jean Todt won’t be accompanying Michelle on her trip to Jordan. “He’s going to be working in London and Rome. He’s very busy himself. We haven’t seen each other in four weeks.” (No time to prepare for the wedding then?) “No time! This year will be very busy. I will probably be doing two to three more movies this year. [The wedding] probably won’t happen this year.” (How about next year?) “I don’t know!”