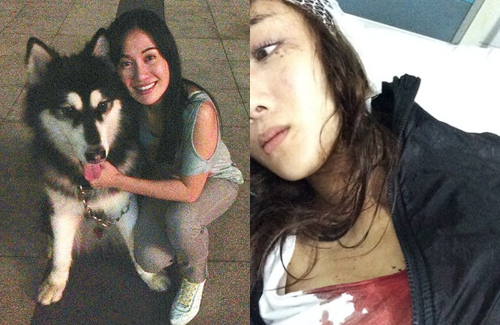 In the latest controversy surrounding Michelle Ye‘s (葉璇) large Alaskan pet dog mauled Mainland Chinese actress Li Yixiao (李依曉) in September. Yixiao was severely injured, incurring more than 20 stitches on the back of her head, but stated that she did not want to pursue the matter further.

Michelle Ye’s manager subsequently published a long post on Weibo, explaining Michelle’s side of the story and implying that the entire incident was not as initially perceived.

According to Michelle’s manager, the dog responsible for the injury was an abandoned stray who had recently been adopted. Many of Michelle’s friends at the party wanted to see her dog, so the group returned to Michelle’s hotel. The strong smell of alcohol from the guests caused the dog discomfort, including sneezing and whimpering. As the dog’s signs of discomfort were overlooked, it grew even more restless, eventually attacking Li Yixiao’s left ear and the back of her head.

Michelle’s manager went on to describe what happened immediately after the incident, “Michelle felt extremely remorseful and asked me to visit Yixiao on her behalf. Michelle also offered to pay for all the [medical] expenses incurred as a result of this incident. As I had prior engagements on the day of the incident, I asked Ju Chunlei (巨春雷) to visit Yixiao first. I specifically asked Chunlei for the favor as we had previously worked together. I also knew that his wife belonged to the same management company as Yixiao and was good friends with her.”

Michelle’s manager also expressed worries over Chunlei’s involvement, implying that he had an ulterior motive in publicizing the incident, “Before I made the telephone call to Chunlei, I wondered if he would take advantage of the situation for publicity gains. I thought that since we were friends, I should trust him. Furthermore, [Michelle and I] have nothing to hide. Chunlei went to visit Yixiao and later sent me many photos detailing her injuries. Seeing the photos, I felt terrible and forwarded them to Michelle, but also secretly began to worry that the photos might be used for ulterior purposes.”