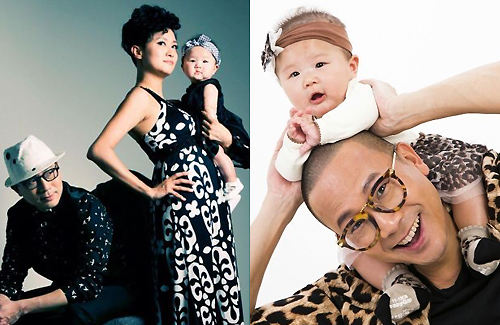 Last year today, Mimi Lo (羅敏莊) was engulfed in the preparations for her first major solo concert at the Queen Elizabeth Stadium. Today, she is busy caring for her six-month old daughter, Jan Chan (陳禛). “Who knew I would be doing this a year later?”

Mimi and her actor husband, Power Chan (陳國邦), tried to find a balance between work and family, but the couple came to realize that they would have to ultimately choose one. “Many seniors told us about how much they regretted not spending enough time with their children as they were growing up,” said Power. “We want Jan to know that we will be here for her.”

Of course, Power and Mimi are not retiring from the entertainment industry. Power still has a contract with TVB, and he is currently filming the TVB period drama Gilded Chopsticks <食為奴> with Joey Meng (萬綺雯), Wong Cho Lam (王祖藍), and Ben Wong (黃智賢). However, Mimi has temporarily withdrawn herself from showbiz to be a full-time mother.

Power clarified, “[TVB] wanted to renew our contracts, but we want to reserve our schedules for our baby during this crucial period. We are not rich, but we can still handle a year or two with just a single income. In exchange, we get to spend more time with Jan. It’s worth it.”

Life will never be more stressful and tiring until you become a parent. As for Power and Mimi, they actually enjoy tackling the physical and mental pressure.

“Our baby has not only made us happy, but also our family,” Power gushed. “Every few days in a week, Jan will stay at her grandparents’ place. When she is living there, [Mimi’s] whole family would swarm to Jan and give her hugs and kisses. There is even less arguing,” Power added with a chuckle.

Extended family aside, Power and Mimi’s own relationship has also strengthened because of their daughter.

“It was only the two of us then. It would have much easier to get a divorce,” Power said smugly. “But now that we have Jan, it’s harder to [get a divorce] now…” The entire room burst into laughter.

“It’s true! It’s true! We always talked about getting a divorce,” Mimi joked. “Back then it was arguing about who would have custody to which cat, but now, we have to add Jan in the mix.”

“Joking aside, our daughter has really strengthened our relationship.” Mimi added, “Power has changed a lot too. He’s much more talkative now.”

“I’ve noticed that too! During my older photo shoots, I wouldn’t pose or smile much. Now that Jan is here with us, I’ve become more lively in front of the camera!” Source: Recruit May 2013 via kuangaitvb.com