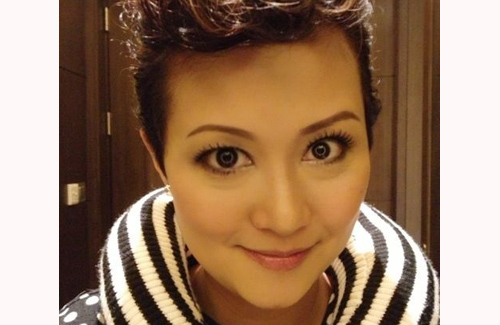 Thirty-eight-year old Mimi Lo (羅敏莊) has been at TVB for 13 years, portraying small roles in numerous dramas. According to Sudden Weekly, she ranted to the media about being poorly treated by the company. Mimi’s contract with TVB is almost over, but no one bothered to contact her about its renewal.

Mimi said dishearteningly, “The funny thing is, TVB says I owe them show debts, and yet they don’t give me opportunities to work. I gave my youth to TVB, and what is the result?”

Feeling unjust for his wife, Power Chan (陳國邦) publicly exclaimed, “Mimi does not have enough show debts to pay back TVB. I think the system needs to be adjusted. It’s not that she doesn’t want to accept jobs, but because the producers haven’t been contacting her. It’s not fair if they keep demanding the show debts.”

The show debt issue started last year in November, when Mimi gave birth to her baby daughter. Her pregnancy had been an accident, and at the time, she occasionally appeared in variety shows instead of filming dramas. Mimi revealed, “When I was taking care of my daughter, I still called TVB to ask if there was anything they wanted me to do. They told me there was nothing suitable. However, within a month, I received a call saying, ‘You owe the company over a hundred show debts, so quickly get back to work!” It’s so unreasonable. It’s not that I’m not willing to work. In fact, I can take on any job. Even acting as a passerby is fine too. I was always on standby, but they didn’t contact me at all. Now that my contract is almost over, they’re saying that I owe them?”

Currently, Mimi acts as a host for The Green Room <今日 VIP> and Pleasure & Leisure <都市閒情>, which allow her to pay back 12 show debts a month. Despite this, she will be unable to be free of debts by the time her contract ends. Dissatisfied with TVB, Mimi said, “At this point, even if they contact me, I will not be renewing my contract!” Furthermore, Power believes it is best for his wife to rest at home and take care of their daughter.

TVB management executive, Virginia Lok (樂易玲), explained that the company usually contacts the artists one month prior their contract’s expiration date. She will be contacting Mimi in the next two months. Regarding the problem with show debts, Ms. Lok said, “Before she had her baby, there were producers asking her to film dramas. But her manager gave them a really busy schedule, so the producers retreated. As far as I know, she does not owe more than a hundred show debts. Plus, we did let her host The Green Room and Pleasure & Leisure.”

Would Mimi have to pay fines if she is unable to pay the show debts before her contract ends? “Let’s not talk about this!” Ms. Lok said.

Despite Sudden Weekly’s flagrant report about her dissatisfaction about TVB, Mimi claimed that her words were distorted by the publication. She wrote on her Weibo, “What [I] said has been distorted. I have already been the victim of fleeting fortunes this year and ‘offended many people.'”