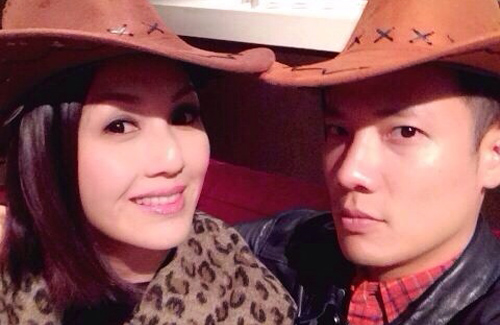 After giving birth to her son Torres Ting in 2012, Miriam Yeung (楊千嬅) wanted to expand their family size. Since Miriam had to undergo uterine fibroid surgery, she and husband Real Ting (丁子高) postponed their baby plans until Miriam regained her health. Now that Miriam is well rested, she was seen shopping for baby clothes with a budging belly, fueling reports that Miriam may be pregnant once again.

Reporters uncovered that Miriam had been eagerly searching for traditional secret formulas to conceive a baby girl. Miriam had carefully followed a strict diet, with an increased intake of fish and meat. As for Real, he incorporated more vegetables, milk products, and honey into his meals. Real has been going to the doctors for regular checkups, and jogging every morning to stay in shape. Since Miriam is also highly superstitious, it was said that she consulted with a feng shui master in order to learn secret methods in conceiving a girl.

Since becoming a mother, Miriam has notably reduced her work load. She enjoys spending time with her nearly two-year-old son. Since there are increased pregnancy risks with age, the 40-year-old star is eager to have a second child, preferably a daughter soon.

Perhaps not ready to let the public know about her pregnancy yet, Miriam replied that she had simply gained weight. “I’ve been too happy since becoming Mrs. Ting, that’s why I got fat.” When asked why she was buying baby girl outfits, Miriam disclosed that they were gifts for her friends in the future.