Fit from their hard training, the 24 contestants of Miss Hong Kong 2021 wore swimsuits to meet the media earlier.

There were a few that stood out from the crowd, including early favorites Yvette Chan (陳聖瑜) who stands at 5 feet 4 inches and weighs 105 pounds. Carina Leung (梁凱晴) is also 5 feet 4 inches and weighs 107 pounds. Others that caught the eye of the press include: Esther Chan (陳懿德), Nicoles Ma (馬嘉希), Kristy Shiu (邵初), Angel Yu (余曉蕙), and Trixie Yu (余詠童). 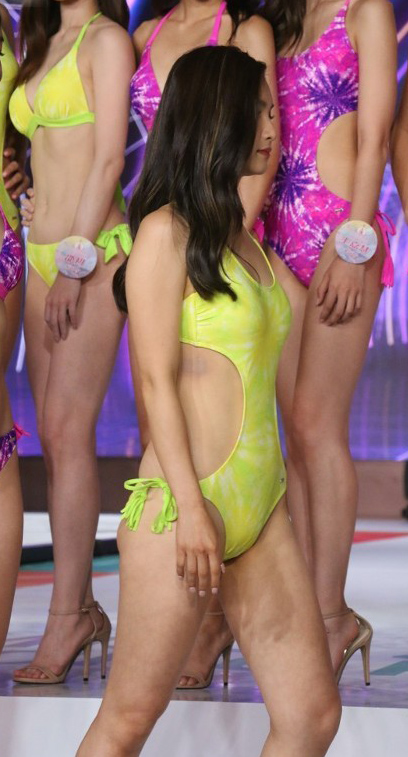 Actor Eddie Kwan’s (關禮傑) daughter, Fabienne Leung (關楓馨), felt very nervous about the swimsuit competition and was not prepared. Admitting that she is not very pleased with her lower body, which is not very toned, she feels that she has a good personality, communication skills, and values.

When reporters pointed out her tattoo on her right ribcage, which Fabienne had used heavy foundation to cover up, she stuttered, “I got it when I was very young, and had it for a long time. The tattoo doesn’t have any special meaning, and I have not thought about removing it.”

Reporters stated that in the past very few of the winners had tattoos, and asked if Fabienne is afraid that it will affect her chances. Since the tattoo is a part of her body, if she loses due to it, then she will have to accept it. She will continue trying her best in the competition.

The contestants will soon be given missions, and will be scored based on their beauty, intelligence, character, and modesty. The judges will include TVB executives Eric Tsang (曾志偉) and Virginia Lok (樂易玲).

Contestants will be continuously eliminated, and the results will be aired as a reality show. The contestants had a staycation earlier, where they received specialized training. A six-episode show of the staycation will air starting on August 9. The semifinals will take place on August 22, while the finals will occur on September 12.