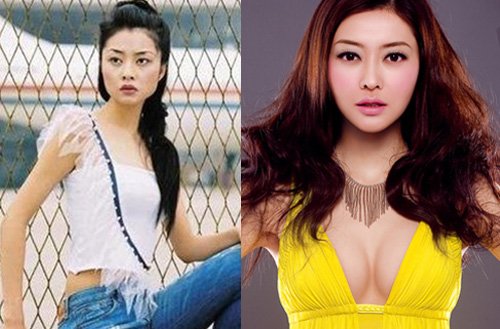 Aaron Kwok’s girlfriend, Lynn Hung, appears to have received extensive plastic surgery, including her eyes, nose, jaw, and chest. Lynn’s looks today are a complete transformation for her modeling days in Nanjing! Leon Lai’s wife, Gaile Lok, once openly admitted that she had received breast augmentation to become a C-cup size. However, Gaile allegedly may have removed her breast implants shortly afterward, or possibly downgraded to a smaller size to appear more “natural.” However, Gaile appears to be naturally blessed with sexy, bee stung lips.

In addition, Gaile may have received rhinoplasty, or surgical enhancement of one’s nose. Rhinoplasty is popular in the modeling industry. A well proportioned nose anchors the features for the rest of the face. A western beauty ideal such as a high nose bridge, well sculpted nose tip, and pinched nostrils appear to have become a standard that numerous Chinese celebrities aim for. The topic of whether Chrissie Chau’s breasts are real or fake is often discussed, distracting us from Chrissie’s face, which may have received a rhinoplasty procedure. Compared to photos of Chrissie when she was a teenager, her current nose appears visibly more sculpted with reduce nostril flare. Along with Angelababy, Janice Man is one of Hong Kong most popular “leng mos” (beautiful models). When Janice first started out in the modeling agency, she was quite cute. To make her career bigger, Janice went under the knife to restructure her nose, chasing after the pointy, chiseled nose that every model seems to lust after.

Janice Man’s rhinoplasty procedure may be considered largely successful, as the results look great and indeed her face is very striking!

This article is an original feature at JayneStars.com. Please credit properly if reposted.

Jayne: Rhinoplasty, along with double eyelid surgery, add such dramatic changes to the face. Rhinoplasty is more common among Hong Kong celebrities than we think! For the above models, I do believe they went under the knife for permanent changes to their nose (shape looks dramatically different) rather than for minor enhancement through hyaluronic acid injections.