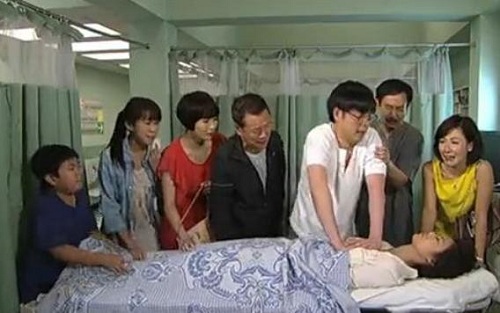 The finale for TVB series, Wish and Switch <換樂無窮> was aired yesterday. The audience complained about the series showing a death scene during the Lunar New Year holiday period. Producer Lam Chi Wah (林志華) explained, “At the time of filming, we did not realize that the drama will be released during the New Year. After that fact was known, we already made editing adjustments to dilute the death scene. The scene where Myolie Wu (胡杏兒) was stabbed was not explictly shown on screen. In addition, the death scene was broadcast 7 days after Lunar New Year’s day; hopefully the audience understands that the scene was necessary for the plot. If everyone truly feels uncomfortable, then I apologize!”

At the hospital, while attempting to ressurect Myolie’s life, Johnson Li (李思捷) pressed his hands heavily on her chest. Netizens were outraged by Johnson touching Myolie’s chest in the scene. Producer Lam explained that adequate preparations were made during the filming and praised Myolie for her professionalism, “It was Myolie who offered that it was okay for Johnson Li to place his hands on her chest. She was very professional.” (Johnson Li benefitted from the scene?) “It was not on purpose!”

Jayne: What did everyone think of the ending for “Wish and Switch”?