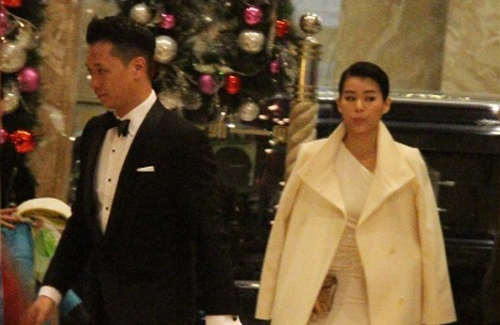 Since her high-profile breakup with Bosco Wong (黃宗澤) three years ago, Myolie Wu (胡杏兒) has remained single despite the number of interested pursuers. Frequently receiving flowers, including a bouquet from “Mr. Right” recently, Myolie is speculated to be dating Selena Li‘s (李詩韻) ex-boyfriend secretly.

On December 30, Myolie and finance guru, Phil, attended a charity gala together. At the charity ball, Myolie was dressed in all white and remained by Phil’s side the entire night.

Phil reportedly hails from a very impressive background, given both his finance credentials and ownership of Hong Kong nightclub, Play. He had previously dated Selena Li (李詩韻) for one year and was also linked to Miss Chinese International 2012, Kelly Cheung (張曦雯).

When contacted, Phil denied dating Myolie and said, “Who said we are dating? We just went to the ball together. We are friends and I don’t really want to say too much.”

Myolie revealed earlier that she has several pursuers outside the entertainment industry and is the midst of getting to know them better. Currently in Guangzhou filming for a Mainland reality show, Myolie responded that she prefers to text rather than meet her admirers in person, for fear of being photographed by the paparazzi.

This article is written by Jingles for JayneStars.com