The second season of Chinese reality series Everybody Stand By <演員請就位> ended with a bang on December 5, 2020, when the show announced that Myolie Wu has won its Best Performer of the Year award.

Everybody Stand By is a reality competition series produced by Tencent Video, and has 40 actors star in a series of mini films and compete against each other for the year’s best performance. This season’s judges and directors include Chen Kaige (陳凱歌), Derek Yee (爾冬陞), Zhao Wei (趙薇), and Guo Jingming (郭敬明).

On the final episode which aired on December 5, the judges announced that Myolie Wu has won the year’s best performance, succeeding Chinese actor Niu Junfeng (牛駿峰) from season one. Film Queen Kara Wai (惠英紅) presented the award to Myolie.

Myolie was in tears when she received her award. She stated that she is grateful for having such a fortunate career, and expressed that she’s waited 21 years for a chance to work with director Chen Kaige. “I can’t believe that day had come!” she cried. 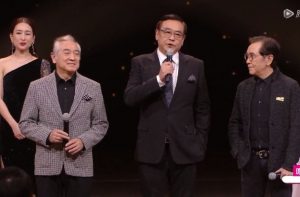 The former TVB actress also thanked veteran actors Francis Ng (吳鎮宇) and Paul Chun (秦沛), who were among the audience congratulating her, for their unwavering support during the milestones of her career.

Paul also appeared on the same stage with Derek Yee and David Chiang (姜大衛), marking the Everybody Stand By stage as one of the rare stages where all three brothers were seen together.

Myolie did not stop the words of gratitude on her stage. She continued on social media, where she thanked the fans for their ongoing support in the last two decades. She also added, “A netizen had pointed out to me that the last time I won an [acting] award was on December 5, 2011. I can’t believe that I’m going through the same experience the same day nine years later.”

Nine years ago, Myolie won Hong Kong’s TV Queen for her role in the TVB anniversary drama Curse of the Royal Harem <萬凰之王>. 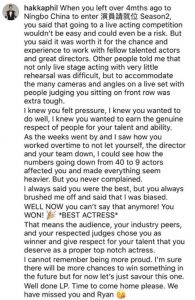