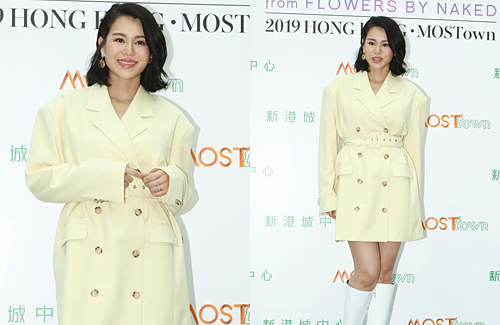 After tying the knot in 2015, Myolie Wu (胡杏兒) and Philip Lee (李乘德) has always been open about their desire to have a large family. Earlier this month, the couple announced the arrival of their second son, Ryan Lee (李奕霖), who was actually born in mid-June. Recently, Myolie completed her one-month confinement period and attended a promotional event. This is her first public appearance since giving birth to Ryan.

Donning an oversized pale-yellow trench dress, Myolie still appeared slightly bloated and has not lost all of her baby weight yet. She candidly expressed that she is still 10 pounds more than her pre-pregnancy weight. The glowing mother-of-two shared details about Ryan, who weighed 7 pounds and 8 ounces at birth. “He has a really big appetite. I feel like I’m a milk-producing machine right now. I have to pump and feed him regularly. But fortunately, breastfeeding also helps with weight loss. Ryan has quite a temper too. When he’s hungry, he would cry so loudly that the entire house would be riled. Ryan’s birth, though, was very smooth and labor went quickly.”

On whether the couple have plans for a third baby, Myolie admitted, “We have plans, but we want to see if we can handle two first.”

When asked how her older son, Brendan (李奕霆), is responding to having a baby brother, Myolie shared that Brendan is quite infatuated with Ryan. He often kisses and holds Ryan. Sometimes, though, he would get jealous and push his brother away. Myolie said, “I don’t comfort him [Brendan]. He understands that this is his little brother.”

Now that her one-month confinement is over, Myolie is excited to resume work. However, she will take it slow and has only accepted short, promotional jobs and does not have any film work lined up yet. Next month, she will be traveling to the United States for a stage event. When asked whether she will have attachment issues and not want to leave her boys, Myolie said, “The second one is much better. When I had my first child, I did not go on any long-distance work trips for a year!”