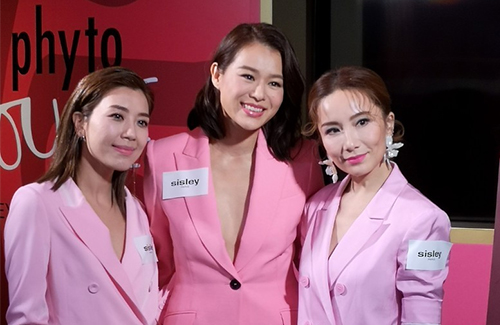 At an event for a makeup brand, close friends Myolie, Mandy, and Paisley showed up wearing pink blazers. Myolie had a hot pink blazer and matching long slacks; Mandy wore shorts and a blazer with a lighter shade of pink. Paisley’s outfit, also a blazer, was pale pink.

Myolie wore nothing underneath her blazer. Asking if she feels safe, she said, “Of course I do. I’ve tested all the ankles. There will be no exposure today.” She also shared a bit of her private life with the press, telling reporters that her son will turn one in October. “We will be holding a birthday party. Right now we’re trying to come up with a cake. I prefer a simpler party with only close friends.”

The former TVB actress said she has been taking French classes for a new television drama. “I went to France earlier, and I really wanted to use French to speak with the locals. On the first day of class, the teacher asked us about our careers. One said a baker, another said a lawyer. When it came to my turn to share, the students told the teacher that I am a housewife. (Why?) I guess they didn’t want the teacher to know that I’m an actress! Anyway, it’s great to be back at school. The class is once a week for three hours.”