Myolie Wu Not Afraid to Pursue Her Dreams 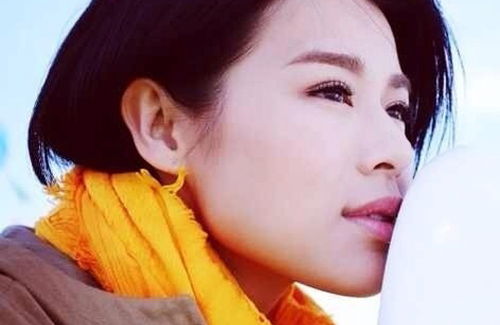 “Falling in love is up to fate. We tried our best and gave our best, but there’s nothing we can do if our ending doesn’t turn out to be what we predicted. I can only say that we were not fated to be,” Myolie Wu (胡杏兒) commented on her 8-year relationship with ex-boyfriend, Bosco Wong (黃宗澤). Ever since their breakup, her target has switched to her career. Taking as many chances as possible, Myolie hopes to bring her acting skills to a new level.

“Perhaps being single is better for my career. When I was dating, my focus was always on my other half. Now that I’m single, I can talk more about work in media interviews and become more devoted to my career and lifestyle,” she said.

Currently busy filming TVB series, No Reserve <巾幗梟雄之諜血長天>, Myolie admitted she initially felt a lot of pressure. “It later turned into motivation though. I told myself to do my best and not think too much about other things.” Myolie portrays Cheung Kei Sang, an agent for the Communist Party of China, who has faced many tragic experiences.

“There were many scenes where my character had to leave her loved ones. The process was tough at first, because I faced too many emotional ups and downs, which eventually led to insomnia. But now that we’re nearing the end of filming, everything is becoming much better,” Myolie revealed. She is now left with a feeling of accomplishment and has high hopes for the series to be well-received.

Speaking of grabbing the TV Queen title this year, Myolie expressed, “Receiving an award or not depends on many factors. It’s fine as long as I tried my best. Even if a certain role is criticized by the audience, it doesn’t mean I wasn’t good enough.”

Having participated in numerous dramas, it was hard for Myolie to pick out her favorite character. “It constantly changes from time to time,” she said. “Cheung Kei Sang from No Reserve was the hardest to portray, but it served as a new challenge. I also really like Wong Sze Fu from Ghetto Justice <怒火街頭> and Fan Suk Heung from Wish and Switch <換樂無窮>.”

Although Myolie has portrayed many different types of roles, her wish to play a doctor has yet to come true. “I’ve always been interested in medical professions since childhood. Sadly, my grades weren’t good enough and I didn’t make it into medicine school. It would be great if I can be a doctor onscreen.”

Is Myolie the type of person who will give her all for what she wants? “Dreams must be sought after. Don’t wait until you’re old or when you’ve lost all chances and then regret not taking all the opportunities once offered. I am a pretty courageous person, and I often use my courage to try new things. Even if I fail, at least I tried.”

Besides acting, Myolie has also been praised for her voice. “I believe I will sing if I have time left over. Being a singer in Hong Kong is not easy, and they don’t earn a lot of money either. There’s pressure involved and I’m worried my singing is not up to par. I’ll try if there are chances, but it’s not something I’m striving for.”

Myolie expressed her ultimate goal is to work outside Asia. “Although it seems really far away and difficult, I think just having this thought is a good thing. I’m trying my best to have it come true.”

47 comments to Myolie Wu Not Afraid to Pursue Her Dreams