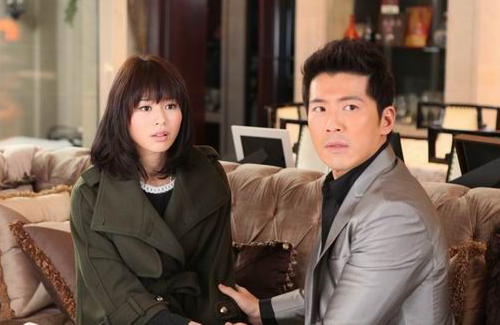 Myolie Wu (胡杏兒) treated the cast and crew of Ghetto Justice 2 <怒火街頭2> to a dinner to celebrate the episode premiere of Ghetto Justice 2 on July 30th. The newly single actress looked noticeably thinner and paler, and refused to comment on her breakup with Bosco Wong (黃宗澤), her boyfriend of 8 years.

Recent reports claimed that TVB originally planned to film Wars of In-Laws 3<我的野蠻奶奶 III> in early 2013, but the plan was shaken by Boscolie’s breakup.  Myolie allegedly refused to costar or appear in a performance show alongside Bosco for the time being.

Yesterday, TVB executive Tsang Sing Ming (曾醒明) released a statement clarifying that TVB never had plans to film Wars of In-Laws 3, and said that the actors’ schedules are fully booked until the end of next year. Boscolie’s costar in Wars of In-Laws, Liza Wang (汪明荃), also expressed her confusion regarding rumored project, Wars of In-Laws 3. Liza said TVB never discussed such plans with her.

Following Bosco’s infidelity scandals, which was originally said to be the cause of Boscolie’s break-up, recent reports alleged that it was Myolie who gave up on Bosco after falling in love with Taiwanese actor, Eric Huang (黃少祺), Myolie’s costar in the mainland Chinese drama, Jin Yu Man Tang <金玉滿堂>.

After the Ghetto Justice 2 dinner, Myolie denied her romantic rumors with Eric once again through Weibo. Regarding the release of Myolie and Eric’s bed photos, she remarked angrily, “Those are obviously set photos! I’ve had enough! I really don’t want to see new rumors coming out every day. Stop hurting us! Just because I’m not talking about it doesn’t mean I’m a mute! Please let us go!”

In related news, Bosco’s rumored girlfriend, Liu Yan (柳岩), quickly flew back to Beijing after completing filming in Hong Kong. Although Liu Yan had already denied any romantic linkage with Bosco, various sources say that her wealthy boyfriend was still very upset with the reports, and she was rushing back to Beijing to explain the issue. Liu Yan was spotted coming out of a five-star hotel in Beijing, while wearing large, dark sunglasses. A friend came to pick her up 10 minutes later.