Myolie Wu to Take Break in South Korea with BFFs 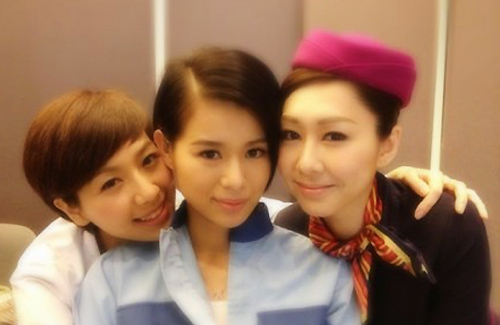 Lamenting that she needed a break for the past few months, Myolie Wu (胡杏兒), who just completed the filming for The Vinegar Lady <醋娘子>, can now finally have time to settle down to plan for her early spring getaway. Next month, Myolie and her best friends – Nancy Wu (胡定欣), Paisley Wu (胡蓓蔚), and Mandy Wong (黃智雯) – will be off to South Korea for a lengthy vacation.

Mandy revealed their vacation plans at a shopping mall function yesterday, disclosing that they are currently planning for their trip to South Korea. Mandy joked that she will be on the lookout for good-looking Korean men and is expecting to spend a lot of money. She also pointed out that she has been catching up to the latest episodes of the hit Korean SBS drama My Love From the Star – also known as You Who Came from the Stars – a romantic drama which stars Gianna Jun and Kim Soo Hyun.

Myolie’s ex-boyfriend, Bosco Wong (黃宗澤), recently announced his new relationship with Hong Kong model Vanessa Yeung (楊崢), who is nine years his senior. Asked if Myolie’s mood had changed at all after the news broke, Mandy expressed that she recently attended a Lunar New Year gathering with her close friends and said she did not see Myolie acting differently. “She’s very happy. After the gathering, we even went to her house to talk some more.”

Myolie turned to her friends for comfort during her breakup with Bosco two years ago, and often shares her deepest secrets with them. Did Myolie mentioned Bosco at all during their recent gathering? “Not particularly. We mainly talked about our upcoming trip to Korea,” said Mandy.