Myolie Wu Wants Everyone to Guess the Gender of Her Baby 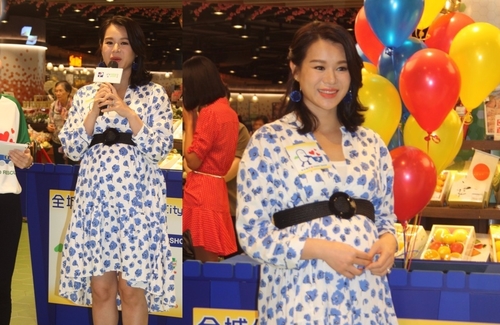 Despite being seven months pregnant with swollen feet, Myolie Wu (胡杏兒) attended a charity event hosted inside a supermarket alongside supermodel Coco Chiang (蔣怡). As she was working throughout her first pregnancy as well, the actress does not plan on going on a hiatus until June – about a month before her expected delivery date in July. When reporters asked her for her baby’s gender, Myolie remained tight-lipped.

“I want everyone to take a guess,” the mother cheekily said. “I’ll tell you after I give birth because it’ll be boring if I reveal the answer so soon. But I know someone photographed me buying boy clothes before. They were actually for my helper; her expected delivery date is the same as mine, which is really amazing, but she already went back to the Philippines.”

Although Gigi Leung (梁詠琪) gifted Myolie’s baby yellow clothing, Myolie stressed that yellow is a neutral color and can be worn by both boys and girls. “The clothes are from her brand, Nanos. I didn’t reveal the gender to anyone except my family. Even my friends don’t know,” Myolie shared.

She added that her one and a half-year-old son, Brendan Lee, doesn’t know he’ll be a brother soon either. The actress said, “He would hug and kiss my belly, but I don’t think he understands there’s a baby in there. He’s probably curious as to why my belly is so big.”

When asked if Brendan will get jealous of his sibling, she said she carries other babies to test him sometimes. “For example, last time my husband carried Linda Chung‘s (鍾嘉欣) son when she came back, and my son was so stunned. He didn’t cry or yell, but he was probably wondering why daddy is holding another baby. He was a little jealous, so we might have to train him a bit. I’ll wait for the baby to be born [to teach him how to be a brother],” Myolie said.

While it may be hard for Brendan to adjust at first, Myolie said she also feels bad for the baby in her belly. “Being the second child is kind of sad because everything will be hand-me-downs. We’ll be using a lot of old stuff, so we don’t have to rebuy a lot of things except for clothes,” she laughed.

Myolie revealed she is going to try for a natural birth again this time. However, she is a bit scared after watching videos of childbirth earlier.