Ever since Myolie Wu (胡杏兒) has shifted her career to China, her career and popularity sharply rose. Solidifying her acting skills, the 41-year-old actress joined in Chinese acting competition Everybody Stand By <演員請就位> and was named Best Performer. Reflecting on the past, she shared how she overcame her setbacks to find happiness in her career and personal life.

Competed in Miss Hong Kong Because of Financial Necessity

In 1999, Myolie mustered the courage to compete in the Miss Hong Kong pageant despite knowing that she would be under heavy public scrutiny. “To tell you the truth, people didn’t compliment that I was beautiful when I was younger. It wasn’t important to me. Why did I sign up for the pageant? Since I was young, I knew my dad was going to retire when I started my first year of university. So I took on the opportunity and turned into a job. It was a way to meet my most basic survival needs, and it helped me overcome my fears.”

Shortly after winning runner-up in the pageant, Myolie was heavily promoted within three years of joining TVB and received Most Improved Actress for Golden Faith <流金歲月>. Although Myolie’s hard work led to many leading roles, some viewers also questioned her acting skills. Sharing how she handled the criticism, Myolie revealed, “You grit your teeth and keep going.”

Husband Proposed After 3 Months of Dating 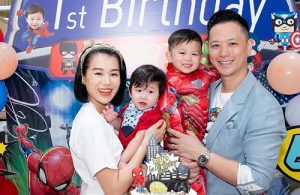 During her time with TVB, Myolie dated fellow actor Bosco Wong (黃宗澤) for seven years before calling it off in 2012. Due to Bosco’s fierce love of independence and the couple’s long separation periods because of work, Myolie was filled with insecurity and their relationship did not turn out the way she wanted.

Three years later, Myolie met Philip Lee (李乘德). She revealed, “I fell in love at first sight, and he kept texting me for three consecutive days expressing all his thoughts on his mind, including his future plans and asked whether I wanted to have children. I felt if he didn’t want to settle down, he wouldn’t ask these questions. These were important issues for him.”

Philip’s sincerity and straightforward personality impressed Myolie, who said, “After we dated for three months, he proposed. We are very compatible, so I felt we could be together in the future.”

The couple married in 2015 and Myolie gave birth to two sons, Brendan in 2017 and Ryan in 2019. Currently, Myolie is pregnant with her third child and is looking forward to a bigger family. The actress’ pregnancy surprised many fans since she was already pregnant while filming Everybody Stand By. Revealing why she kept it a secret, Myolie said, “I didn’t announce it that time. I hope that I can say I have the skills [to compete in the program].”