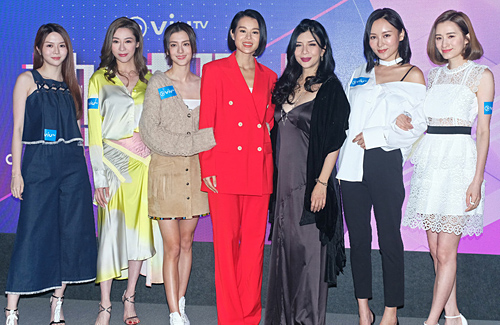 Although Myolie and Karena were rumored earlier to not get along on set, there did not appear to be any awkwardness between them at the promotional event for the drama. Reflecting on the days of filming, Myolie shared that the women always had a lot to talk about. She recalled, “Earlier, Karena invited everyone out for drinks. I told them to instead come hang out at my place, so they can help babysit too!”

The female cast clicked the first time they met and have become good friends. Jess said, “Before filming, we had all only met once. When we came on set, we couldn’t stop talking!” Jeana added, “The first day after we all met, Myolie already opened up a group chat and regularly sent photos to share with us. It made us feel welcomed and generated great atmosphere. We would often keep each other apprised of the filming status. We felt like we’ve known each other for a long time and have become really good friends.”

Isabel, who portrays a mistress in the drama, expressed, “This is the first time I am collaborating with Myolie on a filming project. It was a great atmosphere. From receiving the script to slowly absorbing our characters’ personalities, we have all shared our viewpoints and helped one another out. We’ve taken filming very seriously and everyone has worked hard and did their homework. It’s a great feeling.”

Aside from the cast’s chemistry, viewers are also in for a treat as they can enjoy Vivian Chow‘s (周慧敏) music comeback. It has been 15 years since Vivian sang a theme song for a drama, but ViuTV persuaded her to helm the theme song of Iron Ladies.