Nancy Wu Has No Plans to Get Married This Year 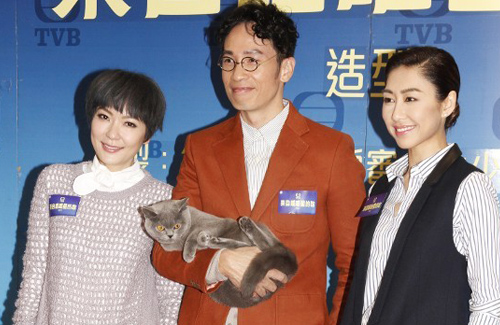 With the popularity of last year’s Ghost of Relativity <鬼同你OT>, TVB is producing a new spin-off titled You Who Came from the Kitty Star <來自喵喵星的妳>. The comedy series will star the original cast consisting of Moses Chan (陳豪), Nancy Wu (胡定欣), and Krystal Tin (田蕊妮). Nancy revealed that she and Moses will play husband and wife, while Krystal will portray the personification of a cat.

In the series, Nancy will give up her pet cat due to having children. Similar to Aimee Chan’s (陳茵媺) decision to give away her cats due to her pregnancy, Moses responded, “I understand from both perspectives. I understand my wife’s decision. She had extremely bad allergies and had to take a lot of medication. Even without the cats, it was bad. If there were no problems, then of course we would all be together.” Shifting the topic of conversation, Moses shared that he will portray a scientist. “My fashion sense [in the series] will reflect Albert Einstein. There is a comedic flair to it.”

Earlier, a fortune teller claimed that Nancy may have difficulty in her love life in the Year of the Monkey. The fortune teller asserted that if Nancy did not get married this year, she may face the possibility of a breakup with her boyfriend, Terry Chan (陳明道). In response to the report, Nancy smiled and said, “Of course I wouldn’t want to break up. But I really don’t know if we will be getting married this year yet. It is only the beginning of the year right now. After filming concludes in June, I will be busy with a concert with my friends.”

When asked whether her boyfriend has gifted her with a diamond ring, Nancy said, “It’s too expensive. Besides, I am very clumsy and easily lose things!”