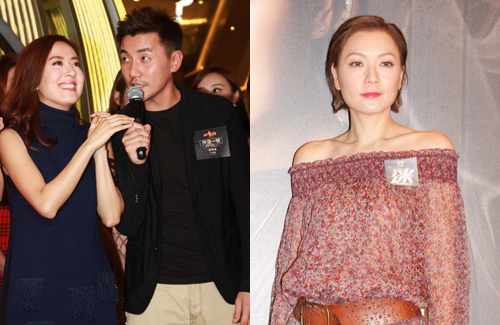 Natalie Tong (唐詩詠) admitted earlier that she has not seen Tony Hung (洪永城) in awhile, fueling gossip that the couple hit a rough patch in their two-year relationship. Natalie was recently photographed meeting with good friend Kristal Tin (田蕊妮) to talk about her troubled love life.

Dressed in a large sweatshirt with no makeup on, Natalie met up with Kristal for dinner. During the four hours they were there, Natalie appeared without much energy and fairly upset the entire time. Although the two spent hours at the restaurant, they barely touched their food and were seen talking most of the time.

Unfortunately for Natalie, even after hours of lamenting about her rocky relationship with Tony, she did not appear in a better mood when she left the restaurant.

Ex-Girlfriend Back in the Scene?

Although Natalie and Tony were seen out during the Lunar New Year holiday together and seemed like the perfect couple for the past two years, Tony has been reportedly communicating with his ex-girlfriend recently. Upset by this, Natalie was said to be disappointed by Tony.

Asked what Natalie had talked about during their four-hour dinner, Kristal said, “We always meet for dinner and talk. Aside from romantic love, there are also friendship, family, and cats. Chatting for four hours is very minor…we have talked all night before, and she had even stayed overnight at my house.” Asked whether they had talked about Tony, Kristal admitted, “Yes somewhat, but I’m more important than Tony Hung!”