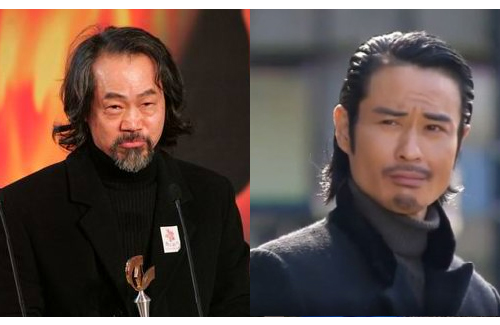 Reviews have been mixed so far, with viewers criticizing Kay’s weak performance and the storyline being too muddled. Nonetheless, many viewers said they are eager to continue the show due to its fresh cast and unusual storyline, which strays from common TVB dramas.

But what many netizens found to be most entertaining was not the series itself, but Kevin’s looks. With his slicked-back long hair and a mustache, netizens joked that Kevin looks like he hasn’t washed his hair in 500 years. They also said the 46-year-old strangely resembles martial arts actor Yuen Wah (元華) with the long hair.

Netizens captured screenshots of Kevin on the show and compared them with Yuen Wah, exclaiming that they looked “like twins.” Though Kevin is not a professional martial artist, his experience in action dramas such as Gloves Come Off <拳王> and Ip Man <葉問> definitely makes the actor a potential candidate to fill in Yuen Wah’s shoes.

“Really looks like Yuen Wah,” said one netizen. “Definitely can be Yuen Wah’s successor, but Yuen Wah is probably a better fighter!”

Another said, “Since the first episode I already thought he looked like Yuen Wah. It turns out that I’m not the only one who thinks that. I’m so touched! Or maybe men who have long hair would turn out to look like Yuen Wah?”

Netizens are also having fun making memes out of Kevin’s performance. Kevin’s “AHH!” screaming on the first episode of the show has been cut into an audio clip, with numerous remix versions.

One netizen joked, “I can now finally understand why Grace Chan (陳凱琳) screamed the way she did in Captain of Destiny <張保仔>.”