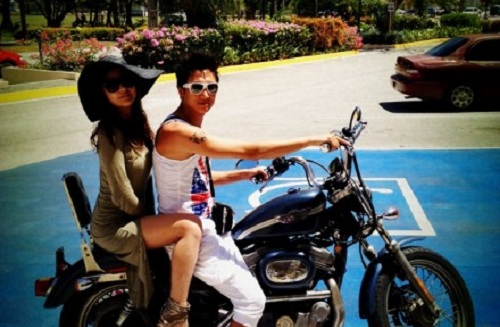 Recently returning from their honeymoon, newlyweds, Timmy Hung (洪天明) and Janet Chow’s (周家蔚) house was robbed! Timmy and Janet lost more than a five-figure sum in jewelry and cash. The theft did not appear to be random and may have been carefully planned while the couple was not home. Apple Daily reported that the address of Timmy and Janet’s new residence at Ma Yau Tong Village in Tseung Kwan O was widely known due to their high profile wedding in March. The couple had just returned from an extended honeymoon in Saipan as well as Los Angeles, United States. Thus, it was disheartening that the newlyweds’ house was robbed.

The thief hit the “gold jackpot” and made away with Janet’s bridal jewelry, gifts that she had received from her wedding. Timmy also lost a gold plaque that he had won in a variety game show last year. In addition, Janet also lost a designer handbag that Timmy had given to her as a first gift while they were dating.

Timmy estimated that the robbery took place on Sunday, April 29th around noon. When the couple returned home at 9 PM, they discovered that their kitchen window had been pried open. Since they were away on their honeymoon earlier, their dog was relocated; otherwise having their dog home may have prevented the robbery.

Although the couple was shocked that their house was robbed, Janet did not seem overly upset. She wrote on her Weibo blog, “Thank you everyone for your concern! Actually, it is not a big deal! My mother is always right! She told me never to leave anything valuable at home. If I listen to her, it is my blessing!”

Timmy felt relieved that they were not home when the robbery took place, as he valued Janet’s personal safety over their possessions. Had the theft occurred while he was still single, he would have physically tackled the robber one-on-one. However, as a married man, Timmy put his wife foremost.

The newlyweds had insomnia after the theft occurred. To make Janet feel safer at home, Timmy promised to install a security alarm system to prevent future forced entry into their house.

Watch Video of the Scene of the Crime, Timmy Hung and Janet Chow’s House

Jayne: Having one’s home robbed is a terrible feeling. The location of Timmy and Janet’s house seems to be in a quiet area, since it is a 3-story independent building, thus easy for thieves to earmark and pick a quiet hour to enter when no one is home.