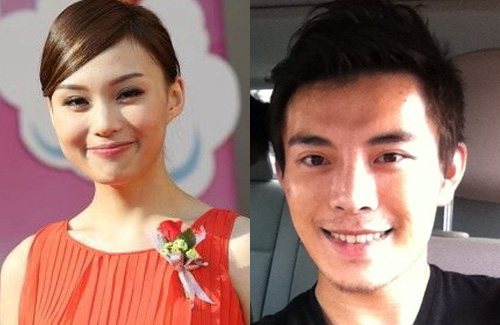 Beijing-born Oceane Zhu (朱璇) is still struggling with her Cantonese, but with her sweet image and confident acting performances, the 2008 Miss Chinese International winner captured the hearts of viewers. Like other beauty pageant winners– Christine Kuo (苟芸慧) and Eliza Sam (岑麗香) – Oceane is among the more promoted goddesses at TVB.

Since debuting five years ago, Oceane rarely had rumors. Her only rumored boyfriend was with Tomson Group executive director Albert Tong (湯珈鋮), the son of film queen Hsu Feng (徐楓). In 2011, Oceane and Albert were spotted watching a Mayday (五月天) concert together. Oceane later denied the rumors, professing that Albert is only an elder brother.

Though Oceane debunked her rumors with Albert, the 26-year-old groaned that she has not dated anyone in the last three years. But now, it appears that Oceane does not have to stay single for long!

Oceane was recently spotted with 24-year-old mainland film actor, Jonathan Wu (伍麟凯), dubbed as “Beijing Raymond Lam” on a dinner date. Jonathan graduated from the Beijing Film Academy in 2008. Since his grandmother is Thai, Jonathan spent the first five years of his life in Thailand before returning to mainland China.

Both from Beijing, it is not at all surprising that Oceane and Jonathan got along well. Jonathan was also seen escorting Oceane back to her apartment home.

Tabloids reported that it was Oceane’s good friend BoBo, wife of Beijing entrepreneur Benson Li (李本勝), who introduced Oceane to Jonathan. Oceane and BoBo have remained close friends since first meeting each other in Beijing. Bobo also moved her business to Hong Kong, and the pair frequently met up.