Although it competes against TVB’s heavyweight drama Murder Diary <刑偵日記>, Ossan’s Love peaked at over 8 percent in ratings and broke ViuTV’s viewership ratings records with the cast delivering humorous performances.

The first episode of Ossan’s Love is fast paced, with Edan introduced as Tin, a real estate agent who is a kidult. He does not know how to take care of himself, and has zero luck with women. Living alone, he relies on his elder sister to stop by and clean his home and replenish his food. 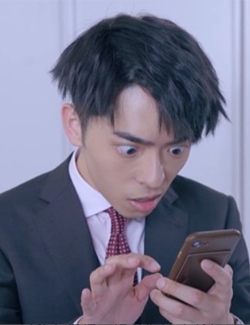 Seeing officemate Muk (Anson Lo), who is very good at cooking and housework, Tin invites him to become his roommate, which later complicates his life in more ways than he is ready for.

When Edan accidentally finds out his married boss KK (Kenny Wong) secretly took many photos of him, he is unprepared for his shocking love confession. KK promises to divorce his wife Rachel Kan (簡慕華) of 20 years.  Tin is left speechless, but KK mistakens his silence as Tin’s agreement to wait for him.

The highlight of episode two is another alarming confession from Muk, who catches Tin in the shower and forces a kiss on him. Muk said bluntly, “I like you. I know you like big boobs, but I also have a big one. Do you want to try it?”

Taking on his first leading role, Edan completely lets go of any burdens as an idol singer. The 24-year-old is fully animated in every scene and his humorous expressions are already becoming popular memes. Edan’s best moments are his interactions with Kenny as he plays the reluctant mouse in his boss’ aggressive pursuit, as well as his roommate-to-lover trope with Anson.

Fellow MIRROR member and good friend, Keung To (姜濤 ), showed his support for Edan and Anson. Posting a picture of himself watching Ossan’s Love, he commented that it is a drama full of surprises which is different from the usual style of Hong Kong filming. Edan’s co-star in Battle Feel <考有Feel>, Kitty Yuen (阮小儀), Vinci Wong (王賢誌) and Jade Kwan (關心妍) also showed their support on social media.

Netizens praised Edan, “I was originally worried that Edan’s acting would be too over the top, but it turned out really good.”

Unlike his past macho roles, Kenny delivers a surprising performance as a real estate branch manager with a feminine side. His crush on Edan’s character is natural and fun to watch, as Kenny lights up like an excited teenage girl each time he sees him.

Many viewers praised Kenny’s performance, and felt that his acting skills were wasted at TVB due to typecasting. Netizens commented, “Kenny was a happy surprise! His acting was really good–it gave me goosebumps, and I almost died laughing. The others were really good too! I need to start chasing the drama!” and “I watched the original and am a die-hard fan, but this remake is up to par. Secretly, I think it’s even better than the original.” 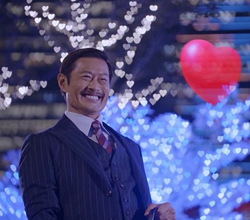 Responding to the positive reactions, Kenny said the good results are due to the efforts of all the cast. In the past, he rarely filmed comedies so he wanted to try this role.

“I thought about how I wanted to portray the character, and that I would need to break out of my usual method of acting. In the past, TVB rarely filmed this type of crazy comedy. Even if they did, I was never first pick for the cast, so I’ve never tried this type of acting. Edan and Anson are also very suitable for their roles. I watched the original [Japanese version], but didn’t bring too much of it into the remake, because there are cultural differences and the sense of humor is different. My build is also different from Kotaro Yoshida,” Kenny said.

In response to the praise that the pacing of the drama is very fast and concise, Kenny pointed out that the original Japanese version is only seven episodes. “We have 15 episodes. ViuTV bought the remake rights, and many scenes and storylines are the same, but we added in some Hong Kong flavor. There will be a lot of character development with the other office workers and Rachel who plays my wife, so please remember to tune in!”

Asked if a second season will follow because of the positive reactions, Kenny said he has not heard any news. However, he does not necessarily need to film a sequel, as he wants to try other genres.

“Ossan’s Love” Confession in the Shower