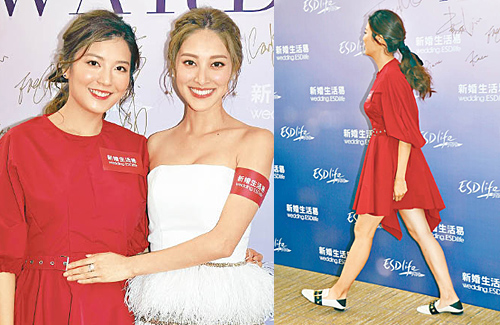 Grace Chan (陳凱琳) and Phoebe Sin (單文柔) both got married this year, and Phoebe is already expecting her first baby! Attending an event together today, Phoebe showed off her mini baby bump to the public for the first time and spoke about her gender preferences for the baby.

Although she is only three months pregnant, Phoebe didn’t want to take any risks and wore a flowing red dress with flats instead of high heels. Smiling from ear to ear, Phoebe explained that she has been getting leg cramps in the middle of the night and also experiencing extreme morning sickness. In her October wedding, Phoebe had noticeably looked like she lost weight. Phoebe explained that husband, Ruco Chan (陳展鵬), has been able to comfort her, “He gives me massages – he’s pretty good at it too!”

Although Ruco prefers to have a girl, Phoebe said, “But we’ll be happy with either a boy or girl.”

Getting married with Kevin Cheng (鄭嘉穎) in August, Grace seemed to admire Phoebe’s baby bump and reached her hand out to touch Phoebe’s belly a few times. When asked if she is hoping for a baby soon, Grace said she’ll let things happen naturally. On whether she prefers a son or daughter, Grace smiled, “If it’s a boy, then he can play tennis with Kevin. If it’s a girl, then we’ll spoil her like a princess.”

Asked if she is planning to go on vacation in order to try for a baby. Grace replied, “I do want to go on vacation but Kevin is very busy with work. He is flying to Beijing for work in December, and I’ll see if I can accompany him as well.”