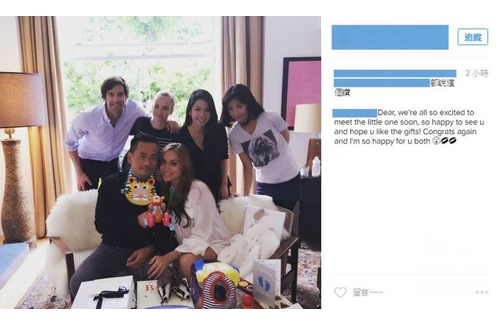 In February, the Hong Kong media reported a rumor that model Mandy Lieu, mistress to the Macau casino tycoon Alvin Chau (周焯華), was pregnant with their second child. Mandy and Alvin’s reps never clarified, but a recently-leaked photo shows a very pregnant Mandy linking arms with a smiling Alvin, sitting on a sofa and posing behind a table filled with baby toys.

The photo, which was a private Instagram post shared by Mandy’s assistant, had the caption, “Dear, we’re all so excited to meet the little one soon, so happy to see [you] like the gifts! Congrats again and I’m so happy for [you] both.”

Mandy, who is said to be expecting a son, will reportedly deliver sometime around July. Some reports have earlier estimates, claiming that it’s going to be in the next few days.

Alvin and Mandy are already parents to one 1-year-old baby girl, who was born in London in May 2015.

Reporters approached Mandy’s former assistant about the pregnancy news. Asking if Mandy has already given birth, her ex-assistant said, “She hasn’t told me anything. That photo was taken last week when I visited her.”

Alvin and Mandy’s extramarital affair is well-documented by the Hong Kong press. Their affair was exposed in 2014, when Alvin was still married to businesswoman Heidi Chu (陳慧玲). Although heavily scrutinized by family and by the public, Alvin maintained a relationship with Mandy and, allegedly, also refused to let go of his wife. The saga ended in late December 2015, when Heidi filed for divorce. Alvin has an older son from a previous wife, as well as two daughters with Heidi.