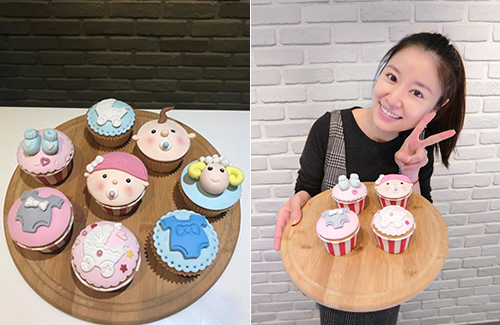 Ruby Lin (林心如) is happy and prepared to be a mother. On December 16, the Taiwanese actress shared a few pictures of herself attending a bakery class on social media. The actress, who married Wallace Huo (霍建華) last summer, has been resting in Taiwan for her pregnancy. The 40-year-old actress did not reveal her baby bump in the pictures she shared, but it is widely known that Ruby is already over seven months pregnant.

In Ruby’s photo collage, it appears that the actress was attending a bakery class, and made cute baby-related designs on her cakes. She’s quite the talented artist!

Ruby never officially confirmed the sex of her baby, but having that she posed next to her pink cakes, it looks like Ruby could be expecting a princess!

3 comments to Pregnant Ruby Lin Designs Cakes for Her Baby