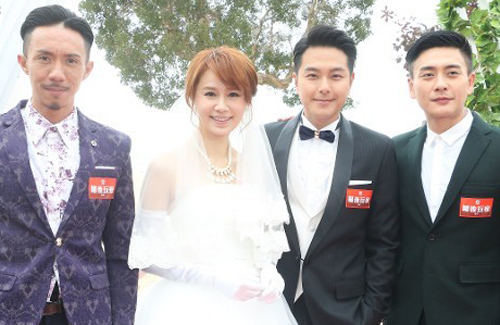 While filming upcoming TVB drama, Behind-the-scenes Player <幕後玩家>, Priscilla Wong (黃翠如) and Edwin Siu (蕭正楠) recently filmed a scene in which their characters got married. As the two are dating in real life, the couple appeared slightly embarrassed and awkward while filming the wedding scene.

When asked about how she felt, Priscilla expressed that all she could feel was the freezing cold temperature, as she was wearing a strapless wedding gown. Edwin praised Priscilla for looking pretty in the wedding gown and added, “It’s really not ideal to be married in winter. I’m fine, as I wore at least three to four layers in this suit. But she has to bare her shoulders and freeze! As actors,  we just have to put up with this. We often have to either wear lots of layers on a hot summer day or film underwater scenes in winter.”

On whether the wedding scene felt like a rehearsal for their actual wedding, Priscilla said, “No, I hope not! In the drama, the moment my character is done with her wedding, she will have some intimate scenes with Bosco Wong‘s (黃宗澤) character.”

Is Edwin be jealous of Bosco? Edwin laughed and said, “I will be beating him up! In the drama, our characters are good friends, but his character proceeds to snatch my wife from me. So there are a few scenes where we fight with each other.”

The couple also expressed that they did not take photographs to remember the day, as they did not have their mobile phones on them. On whether the experience of filming the scene would help them have a smoother wedding in the future, Priscilla immediately started acting coy and refused to answer, hiding behind Edwin. He immediately teased Priscilla, “I thought you’re normally quite outspoken?” Priscilla explained that she did not want the audience to perceive the scene as a wedding rehearsal for the couple. Edwin added, “Since getting married is a once-in-a-lifetime event, I wouldn’t want to experience it while filming. But I will definitely be professional in filming such scenes.”

On when the two plan to get married, Edwin laughed again and responded that he is not sure, “I don’t even know which scenes I’m filming until a few days beforehand! The earlier I know, the more mentally prepared I will be.” As for Priscilla, she dodged the question and said, ‘If we treated this experience as a wedding rehearsal and took ‘wedding photographs’, it would be so awkward!”